Dave Phinney has an original idea for regional wine: the “meta-location” blend.

In contrast to the European model of increasingly small and allegedly special locations regulated by appellation laws, he blends across appellations seeking out old, low-yielding vines to create wines to represent entire states, like each of the three West Coast states, or even countries, like France, Italy, Spain and Argentina.

To accentuate the meta-blend branding, his labels follow the sideways oval used for car decals to represent a state or country. Only the back label tells you the grape varieties used (but not their ratios, nor the names/locations of the source vineyards).

“I seek out high-quality vineyards, and forward-thinking growers, across appellations to create a wine that proudly represents the best viticultural parcels of that country or location. We then combine these parcels of place to craft a wine that pays homage to the country of origin; a wine that makes all of us proud,” says Phinney.

I had tasted two of his “national” blends, from Argentina and Spain, and moved from skepticism to being impressed. Both reds had rich, ripe fruit with a plush texture, but were also balanced with enough acidity and tannin. The Argentine blend featured malbec but also cabernet sauvignon, giving the wine more structure and complexity than most of the varietal malbecs on the market. The Spanish blend did not reveal the grape varieties but the regions involved spoke of old vine tempranillo and grenache. The wine was Spanish, but had more dimension and flavors than I usually find in a Spanish blend.

So, when Phinney’s PR firm, Balzac, contacted me to ask if I’d like to try their new Portuguese and Italian labels, I said that for the purposes of this blog I’d be more interested in tasting the West Coast single-state blends and reporting on them, with my focus on U.S. wines. Phinney’s red wines retail for about $20 in the U.S.

I collaborated with a gourmet friend (we’ll call this person “wineosaur”) who came up with brilliant food to complement these three rich, ripe (15%+) West Coast state wines, the OR-WA-CA blends.

OR4 by Locations Wine

For the record I’m not a fan of wines over 14% alc., especially wines over 15%, and even more, pinot noir wines at 15%. But to be fair, the perception of alcohol was neither obvious or a problem with most wines, and even this pinot noir was more “together” and typical than I expected. 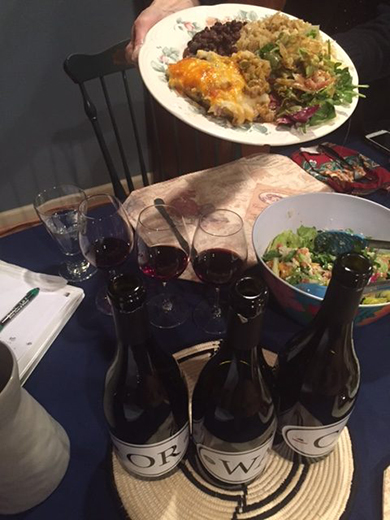 It is 100% pinot noir, all from the Willamette Valley. The first things I liked were what was not there. The color was clear ruby, not opaque purple thanks to coloring agents, that too many West Coast pinot noir producers feel obliged to tart up their pinots with. Second, I liked the lack of new oak on the nose. Phinney is trying to be true to the grape and the region.

On the nose, I was disappointed at first, as I got very little in aromatics; eventually both of us found subtle cherry and mineral notes, smoke and clean earth. On the palate, the flavor was light for 15%, but with pinot, maybe if you remove the oak, at this level of alcohol, you’ll lose the fresh delicate red fruits. There was a hint of strawberry, but I concluded that except for the color, if I didn’t know, I wouldn’t really guess that this was a pinot noir based on aromas and flavors. We both agreed that the wine improved over time (should be decanted) and that strawberry flavors came out with time. Our second favorite.

You might think that a blend representing California should have cabernet sauvignon, or at least zinfandel, the state grape, but this original and iconoclastic blend has neither of these. It is a blend of petite sirah, barbera, tempranillo, syrah and grenache, sort of a Mediterranean blend. Although it’s a hefty 15.5% alcohol, it manages to carry it off with balance and deliver a powerhouse of spicy black fruits with a juicy smooth texture that remind me of Sierra Foothills terroir, with dusty dried fruits and minerality. In fact grapes were sourced from Napa, Sonoma, Mendocino and the Sierra Foothills for this blend.

The color was very opaque garnet/purple. The nose was plush (wineosaur said “red velvet”), with no obvious oak at first, lots of rich ripe red/black fruits and a hint of heat. On the palate, it was zesty, with nice tart acidity (barbera?) balanced with plush smooth ripe tannins, finishing with a smoky flintiness. The constituent grapes made a fun ensemble like a jazz combo, and the flavor seemed very much like zinfandel. It reminded me of the Sierra Foothills reds of Jeff Runquist. We both agreed it was our favorite wine of the trio, also the most food-friendly. With late season winter storms blasting the East Coast this week, this is the wine to keep warm with. Bravo for pulling it off with a 15.5% whopper and making us believe it!

I was looking forward to a state-wide (really, Columbia Valley-wide) original red blend from Locations with a Washington label. This unfortunately was a disappointing wine that did not deliver flavor, finesse or balance.

The other two West Coast state blends managed 15% alcohol well, but this did not. This was a blend of syrah, merlot (the state red darling) and petit sirah, which I’ve not yet seen from Washington as it needs a lot of heat and a long growing season. That was likely the problem here.

Winosaur found raspberry, plum and cranberry fruit on the nose. I found vivid black fruits and some spice. On the palate, the texture was round and fruit-driven with smooth tannins but a little hot on the finish. Bitterness on the finish got more assertive with time. Although the aromatics were promising, the fruit was not as “large” on the palate as it was in the California blend, and the finish was hollow and bitter; winosaur said “missing fruit on the palate that I got on the nose,” and also felt the astringency was intensified by high alcohol. I suspected the petit sirah was not fully ripe and hard tannins were amplified by high alcohol. Next time, harvest earlier and drop the petit sirah, with a syrah/merlot blend, and it should rock.

Visit www.locationswine.com for more information about these and Phinney’s other meta-blend wines.