From a field of 60 entries, all from grapes grown in the Monticello AVA, and from a final field of six (three white wines and three red wines), the top wine of the 2019 Monticello Cup competition was the Mountain Plains 2016 from King Family Vineyards in Crozet.

This meritage-style blend drew its name from a deed drafted in 1773 by Thomas Jefferson to transfer the ownership of a land grant farm established in 1737. Roseland Farm, the home of King Family Vineyards, now sits on part of that original land grant.

The 2016 Mountain Plains blend, which earlier won a spot in the 2019 Governor’s Case (the top twelve wines in the Governor’s Cup Competition), is a blend of Petit Verdot, Cabernet Franc and Merlot grapes. “After careful selection of the ripest fruit from our best vineyard blocks, the grapes were hand-sorted and then destemmed. Based on varietal characteristics, the newborn wines underwent four to eight weeks of maceration in open top, concrete fermentation tanks to extract color, tannin, and concentration. After pressing, the wines were aged separately for 22 months in new barrels from the Tronçais oak forest in Central France, specially selected for their tight grained wood to impart fine tannins, and a well-integrated oak profile. After blending, the wines continued to age to encourage marriage between the base varieties. Rich, dense layers of complexity and a powerful sense of structure promises a wine that will reward extended cellaring. Enjoy now, through 2025 and beyond,” are the winemaker’s notes from Matthieu Finot. Only 160 cases of this wine were produced.

I was reminded of a high-end California Zinfandel such as the Ridge Geyserville by this wine. On the nose it was full of ripe black briar fruits and oak and spice, but was integrated, with ripe fruits, rich and smooth tannins on the palate, with a long finish.

Winemaker Matthieu Finot shared the spotlight in accepting the Cup, with vineyard manager Tristan Campbell, who said, regarding the egregious 2018 vintage, that he has learned to only worry about what he can control, not what he can’t control. 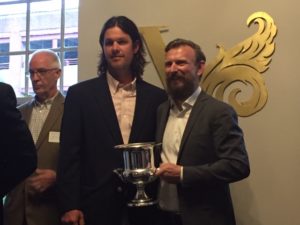