Annual “Open That Bottle of Virginia Wine” Draws 180 Via Zoom

“Open that Bottle of VA Wine” Zoom call: Secretary Ring began, acknowledged how hard everyone in the industry worked to overcome the challenges from the pandemic.

Jay Youmans MW said that aside from a record 545 entries, the quality level at this year’s Governor’s Cup Virginia wine competition was “unprecedented;” 96 wines won gold medals. Frank says that “Diversity across regions and grape varieties was prominent.” Jay said there were a dozen Cabernet Franc wines that he thought were top notch, also really good Sauvignon Blancs, “There were so many good wines, but they didn’t all make it into the Governor’s Case.”

Frank was impressed with the Petit Manseng flight in the gold medal wines. Jay compares that grape to Chenin Blanc in France; says “Nobody else in the world” is making varietal and blend Petit Manseng the way Virginia does, and we can really make a unique statement with this grape.

Frank asks Jay if he has anything to say after ten years of running the Governor’s Cup? Jay responds that “Virginia makes really good red blends; red Bordeaux blends including Tannat added to the blends.” He notes that the challenges of the climate put a limit on what’s possible to excel with here.

Dennis Horton’s granddaughter Caitlin from Horton Vineyards was invited as a representative of a 3rd generation Virginia winemaking family. She said she didn’t know her family grew unusual grapes until she’d go to a wine shop and ask for Pinotage and they didn’t know what she was talking about. She has her own product line, “Gears and Lace”, in a steampunk style. The wines are unusual (such as barrel-aged pinotage rose and a six-year old Tannat port).

Virginia wine bloggers Warren and Paul of “Virginia Wine Time” have visited 190 Viginia wineries! They were tasting Rosemont’s Merlot from 2010 and 2017; said they were both “excellent examples of what Merlot can do in Virginia.” 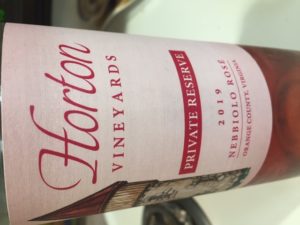 Participants tweeted label shots of wines they were tasting to #OpenVAwine.

Joy Ting and Ben Jordan were introduced; both have their own private label of wine in addition to their day jobs (Joy is research enologist for the Virginia Winemakers Research Exchange; Ben is winemaker at Early Mountain Vineyards). Frank asked him about Petit Manseng; Ben says its skins are thick, the berries are small, the cluster is loose, so this makes the variety rot-resistant much more than most other vinifera grape varieties. “At Early Mountain, we’ve learned we can wait and pick the grape after the rains instead of before,” since the rain can help dilute the high acid and sugar which can help with wine balance. “There is no benchmark for dry [varietal] Petit Manseng in the world which is what makes it exciting for us to experiment with year to year.”

One participant asked “what defines benchmark for Petit Manseng typicity?” Ben Jordan answered that “We get to decide different styles based on the vintage and vineyard site; there is no “typical” style and that’s the neat thing about the grape and its place in Virginia.” “Virginia is a big state,” says Joy Ting. “Petit Manseng has real chemistry differences between different regions but then it’s a fun challenge for the winemaker. Also, we don’t define Petit Manseng; that grape defines itself.”

Frank wanted to discuss Cabernet Franc; first he asked Joy where the wines on her label can be purchased; the shop “In Vino Veritas”, Market Street Wine and the Wine Guild features them; the 2019 vintage is about to come out. Frank is tasting Joy’s 2009 Cabernet Franc. She says she likes to include whole clusters in the fermentation of Cabernet Franc; she says it brings fresh berry flavors and the brown stems bring additional tannins. Frank likes her Loire Valley style Caberet Franc. Ben says that all three EMV labels come from mountain slope vineyard sites. He says that Virginia has a wide variety of styles of Cabernet Franc; because it is consistently reliable in the vineyard it is an important grape for Virginia.

Frank asked if the panelists had ideas for grapes for the future? Caitlin said she thought it was great that “we can grow all kinds of different varieties.” Jay Youmans said he was looking for white blends in the future, but also Italian white varieties like Vermentino and Fiano. Ben Jordan says that it’s great that Virginia has been able to grow a wide variety of grapes, but in the future sustainability will be important. He also thinks many small producers doing their own thing contributes to the diversity of our collective identity. Joy Ting sees the industry growing with increasing quality, but still having a sense of so many individual small wineries contributing to the whole. Secretary Bettina Ring says she’s also excited by the white blends, the Research Exchange: “I think we have a very bright future in Virginia wine.”

Participants on the call were encouraged to tweet their photos of the Virginia wines they were drinking to #OpenVAWine. Frank later said between the Virginia Wine Facebook page and Zoom, it was about 180 live participants, and that other wineries share that live stream to their Facebook pages.  That live stream was shared seven times. “Like last year, I suspect many hundreds will watch the video later. It was a great event and certainly met expectations, especially on the first day of Passover and on a Saturday.”