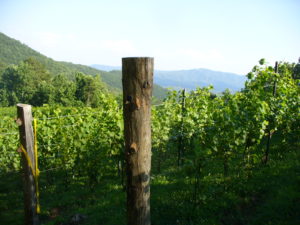 While he was also the third American President, Jefferson himself wished to be remembered for only three things: his writing the Declaration of Independence and the Statutes for Religious Freedom in Virginia, and as the founder of the University of Virginia.

Jefferson had many other impressive achievements, such as authorizing the Lewis and Clark expedition that brought back a first-hand account of the continent from the Missouri River to the Pacific Coast of Oregon.

Today, I suggest we remember him also as the father of the American wine industry. Jefferson not only enjoyed the sensual pleasure of wine, but believed it was a benefit to good health. When he was inaugurated, Jefferson described his occupation as “farmer,” and he kept meticulous notes of the many fruits and vegetables he grew in his garden book.

Jefferson imported dozens of European vitis vinifera grapevines, planting the first at his estate Monticello in 1771. As I explain in my book “Beyond Jefferson’s Vines: the Evolution of Quality Wine in Virginia”, Jefferson considered wine ” necessary of life” for him, and was enthusiastic about the potential of viticulture in the new United States. In a letter to John Dortie in 1781, Jefferson wrote, “Wine being among the earliest luxuries in which we indulge ourselves, it is desirable it should be made here and we have every soil, aspect, and climate of the best wine countries…”

Jefferson had been the American ambassador to France, where he made a careful study of their wine industry. He noted that grapevines were grown in the poorest soils, which then brought a decent living to the growers, while crops were grown on the better soils. When a proposed excise tax on wine in the Congress was defeated, Jefferson wrote that he “Rejoice as a moralist” at the result, for “No nation is drunk where wine is cheap, and none sober, where the dearness of wine [from high taxation] substitutes ardent spirits as the common beverage.”

Jefferson imported French wines and had them bottled at the source to ensure they would remain unadulterated. He encouraged his friends Washington, Madison, and Monroe to make a habit of light wine consumption and as a complement to fine food. At the time, only Madeira (18-19% alcohol) was imported to the United States because the conditions of a transatlantic voyage on a sailing ship would ruin wines of lower alcoholic strength and delicate flavors.

Unfortunately, Jefferson never harvested a crop from his vineyards. He was away from Monticello for much of the 1780s and for the eight years of his presidency so he was unable to closely supervise the vineyards. A combination of fungal disease, wildlife predation, frosts, and the vine louse phylloxera all doomed his efforts.

Jefferson acknowledged that “it would be well to push the culture” of native grapes, as it would “take centuries for [European vitis vinifera grapes] to adapt to our soil and climate.” Still, he continued to be the prophet’s voice for the future of viticulture in America. In a letter to Count C. P. de Lasteyrie in 1808, he declared that “We could, in the United States, make as great a variety of wines as are made in Europe, not exactly of the same kinds, but doubtless as good.”

Over 200 years later, Jefferson’s prophecy has been achieved. The United States is now a major wine-producing country. According to WineAmerica, an industry advocacy organization:

Virginia, Thomas Jefferson’s home state where there is a documented native wine industry that is over 400 years old, now has over 300 wineries. They produce a range of wines from American, hybrid, and European (vinifera) varieties, and have impressed British wine writers like Hugh Johnson, Andrew Jefford, and the late Steven Spurrier, who declared in 2012 that “Virginia is my favorite North American wine region because it makes the kinds of wines I like to have a second glass of.”

So let’s raise a glass of Virginia (or at least, American) wine to Thomas Jefferson on his 278th birthday, for his prophecy of a fine American wine industry which has now been realized in all 50 states.