The Monticello Wine Trail Media Event, co-organized by Virginia wine writers Frank Morgan and Nancy Bauer, brought a versatile, curated group of 15 writers to Charlottesville on August 1-2 for an immersion in the wines, winemakers and winery owners of the Monticello American Viticultural Area, or AVA. This AVA was recently expanded and now includes all of Albemarle, most of Nelson, and parts of Orange, Green, and Fluvanna counties in Central Virginia (see https://monticellowinetrail.com/avaboundaries for details).

Participants ranged from Dave McIntyre, wine blogger and long-time columnist for the Washington Post, to Shayla Varnado, founder of the Black Girls Wine Society of Richmond, as well as related genres. Attendee Larry Blieberg, a travel writer for larryblieberg.com, is also President of the Society of American Travel Writers. 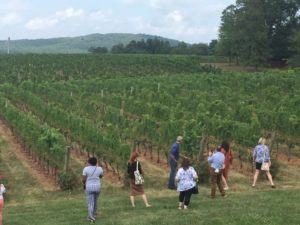 Sunday, August 1st was spent at Barboursville Vineyards. As a way of showcasing the versatility and ageability of his wines, General Manager Luca Paschina treated attendees to a four-course lunch paired with select Barboursville wines. The elegant dishes prepared by the Palladio Restaurant at the winery showcased the wines wonderfully. Wines included Fiano 2019, a white Italian varietal with zesty acidity and lemon pith flavors; a mature Viognier 2014 and a fresh Vermentino 2019 (another Italian white grape with zesty lemon tones); a library bottle of Nebbiolo 2002 paired with the new Octagon-level reserve white blend called Nascent 2018, and a lovely orange-tasting rich but freshly tart dessert wine, Paxxito 2015, made with dried grapes. 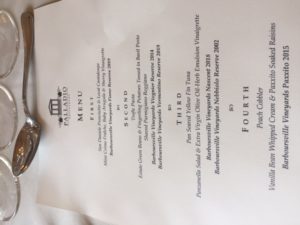 Aside from the high quality, elegance, and variety of the wines, it was an opportunity for the attendees to taste these Italian varieties grown in Virginia. Especially intriguing was the newly-bottled Nascent, which Paschina created as a white peer to Barboursville’s top red blend Octagon. It is a blend of Viognier, Vermentino and Falanghina, the latter being an ancient grape from the south of Italy, thought to have made the Falernum wine prized by the Romans. Even though the wine is from the 2018 vintage, Paschina pointed out that their site had almost no rain in August, and the wine was high quality. The aromas were a complex, fascinating mix of peach, honeysuckle and herbs. On the palate, the wine had viscosity and large volume, finishing with firm acidity on the finish. Rich and complex but balanced, the wine needs another full year to develop in the bottle but is a stylish addition to Barboursville’s lineup.

As a way to focus on the strong-suit Cabernet Franc grape, Paschina opened five vintages; 1998, 2001, 2006, 2014 and 2019, showing the ability of the grape to last over 20 years as well as how much the wine has improved since before the late ’90s, thanks to better clones, rootstocks and site selection.

Sunday evening featured a walk-around tasting with a dozen Monticello AVA winemakers at Afton Mountain Vineyards, with barbecue celebrity Craig Hartman, who catered the dinner, telling attendees the story of barbecue and Virginia’s role in it. 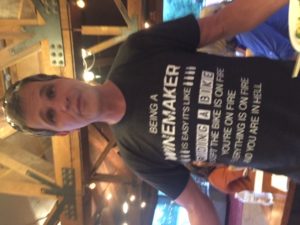 Stephen Barnard, winemaker for Keswick Vineyards and current president of the Monticello Wine Trail, wears a shirt that “tells it like it is” for winemakers.

Here are my personal favorites from that event for wines in different categories:

(80% Chardonnay, 20% Cabernet Franc) This very classy, impressive, and bone-dry sparkling pink wine was aged on the lees for five years, the same amount of time the great champagne houses do for their vintage-designated wines. Complex yeast notes with red fruits on the nose. Dry, smooth, fresh and impressive.

Estate grown, whole-cluster pressed, all stainless steel aged. Loads of grapefruit and passion fruit on the nose and palate, assertive, lots of acidity.

A blend of mostly Cabernet Franc and Merlot with 10% Petit Verdot. These two wines are surprisingly similar; forwardly fruity, then well-integrated and elegant but easy to like. 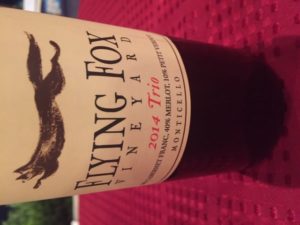 Elegant, no new oak on the nose, silky smooth on the palate, fine ripe fruit typical of the vintage but drinking well now.

This wine was made from the best 25 barrels of these individual wines. Nose: gentle, perfumed fruit, no oak. Palate: solid red and black fruits supported by gentle tannins, oak in the background. Very stylish and elegant.

Nose: fragrantly fruity, typical of the vintage. with raspberry and red cherry notes, almost has the intensity of a Petit Verdot. Palate: like a mixed berry compote, juicy and smooth, like a cool-climate Zinfandel, and ripe smooth tannins with a hint of spice. Sexy!

Monday August 2nd featured a day with panel discussions on specific wine themes. First was “The versatility of Petit Manseng,” the exotic white grape from France that makes a very fruity, high-acid wine that is also easy to grow in Virginia’s humid climate. Joy Ting was moderator, and panelists were Michael Shaps, Shannon Horton (both of their eponymous wineries) and Emily Pelton of Veritas Vineyards. 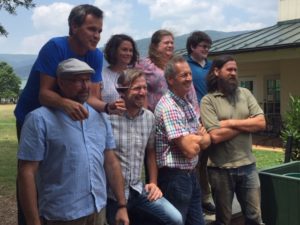 Petit Manseng can be made in dry, semi-dry or sweet styles, and vintage conditions may dictate style for winemakers. Attendees tasted dry and semi to sweet styles. Interestingly, winemakers agreed that soil type played a role in wine style; clay soils were good for choosing a dry style, where drier soil types like sandy loam or shale would tend to produce a must that had better chemistry for a dessert style.

This panel picked up where Luca had left off the day before with his vertical tasting of Barboursville Cabernet Francs over five vintages from 1998. The panel agreed that Cabernet Franc had staked out a position in Virginia from the mid-’90s for a classic vinifera red grape that would ripen in the clay soils of the Monticello AVA and produce a quality red wine that helped brand the state with something a little unique.

Paschina pointed out that the combination of new French certified ENTAV clones grafted on low-vigor rootstocks like C-3309 or 101-14, planted on appropriate sites, made a sea change of difference in wine quality in the last 20 years. He also says it’s very important to drop unripe clusters in the vineyard by the end of veraison (mid-August) to avoid the green “veggies” caused by methoxypyrazines, unripe phenols that give a green pepper twang to Cabernet Franc.

On the other hand, Stephen Barnard and Kirsty Harmon agreed that leafy, herbal notes in Cabernet Franc are appropriate for the varietal, as long as the fruit isn’t masked by green bell pepper. Tim Gorman said his Clay Hill Cabernet Franc takes 3-4 years to really come together in the bottle.

Proving the point that (at least in the Monticello AVA) Cabernet Franc is Virginia’s most promising red, my tasting notes showed high marks across the board for these wineries’ wines. See my notes above for Keswick’s 2019 Cabernet Franc. My other favorite for this session was the Barboursville Vineyards Goodlow Mountain Cabernet Franc 2017. 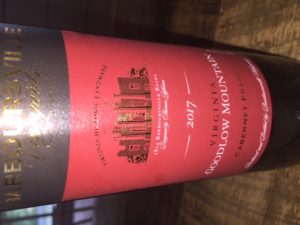 This is the winery’s first release of a single-vineyard Cabernet Franc and it was released a year ago, but shows that this grape in Virginia does need a few years in the bottle to reach its potential. The nose was elegantly perfumed red and black fruits and spices. The palate showed fine, ripe red and black fruits, well-integrated with smooth ripe tannins. This wine is very fine and elegant, drinks well now but is also worth laying down.

The final panel was “Second Labels and Side Hustles,” with co-organizer Nancy Bauer of Virginia Wine in My Pocket as moderator, and Caitlyn Horton of Gears and Lace, Jake Busching of Jake B Wines, Matthieu Finot of Domaine Finot and Tim Rausse of Vino Dal Bosco.

Bauer commented “I noticed the gratitude winemakers felt for being able to connect with each other in person. It’s so clear when you watch the Monticello Wine Region winemakers together how much they respect and really enjoy each other.”

It was pointed out that these side projects could only legally be made and sold in Virginia under an existing winery’s license due to existing regulations. Interestingly, two of the four panelists’ wines were very different but successful styles of Cabernet Franc, while Caitlin Horton poured her sparkling Tannat, Matthieu Finot poured his low-alcohol, carbonic maceration no sulfites added Malbec 2020.

Tim Rausse also poured a natural wine, the Vino Dal Bosco Cabernet Franc 2020, which was lovely and clean with ripe red/black fruits and spice, juicy on the palate with pure Cabernet Franc flavor and downright gluggable! 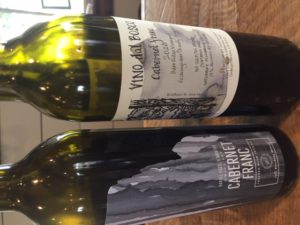 Jake Busching’s Cabernet Franc was very different, a macerated, richly extracted and full-bodied Cabernet Franc from 2017 from the Cedar Creek vineyard near Strasburg. Classic black cherry and black pepper on the nose is followed by more black cherry and pepper on the palate with full volume of flavor and ripe, long tannins. This wine hasn’t been released yet and may not be for awhile, and that’s probably a good thing. This wine “goes to eleven”, but still is a harmonious Cabernet Franc in a large style.

Kathleen Willcox, an attendee who is a freelance wine and travel writer, wrote about this session on Facebook that it was “By far the most daring and iconoclastic wines I sipped in Virginia, and in if I’m being honest, anywhere in a long time. They were also delicious.” Following the seminars, co-organizer Frank Morgan remarked “So far, we’ve received excellent verbal feedback from winemakers thanking us for organizing the event.  More than one winemaker told us that this type of event is much needed.”

Following the conclusion of the seminars, a tasting of other Trail member wines was held. My favorites included: