For the last two weeks, I’ve been busy going to ceremonies and conferences to celebrate and promote Virginia wine. This blog entry will have many more pics that usual and fewer words to give you a feel for this busy period. 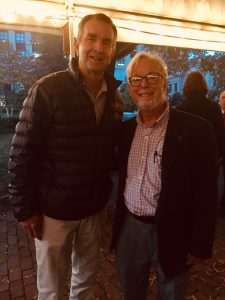 First, I attended a celebration for October Virginia Wine Month at the Executive Mansion in Richmond; here’s a photo of me with Governor Ralph Northam.

Also at this event, the first since the pandemic began where I saw so many industry members together again, I saw fellow Virginia wine blogger and creator of the Virginia Wine in my Pocket app, Nancy Bauer, who I was pleased to hear has moved with her husband to Charlottesville.

Next, I went to the annual American Wine Society conference which was held in Atlantic City. The event began with a tasting of the wines of New Jersey’s Outer Coastal Plain AVA. I enjoyed Cabernet Francs, Albariño, Blaufrankisch (a k a Lemberger), Gruener Veltliner, and even some Italian varietals (Nebbiolo and Barbera). My favorites were the Cabernet Franc from Bellview, and the Nebbiolo and Barbera from Turis. Many people I spoke to affirmed that they were surprised and impressed with the quality of wines from this fairly new region. 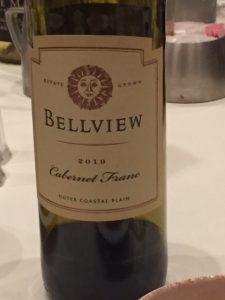 The American Wine Society, with 180 chapters and 7,000 members nationwide, who are largely wine consumers, but also amateur and professional winemakers; chefs, restaurateurs and foodies; educators and students; journalists; wine suppliers and wineries. Their motto is “Where wine exploration never stops”, and you can learn more about the organization at www.americanwinesociety.org.

It was great to see my long-time Eastern wine colleague and friend David Falchek, who has been Executive Director of the AWS for the last few years. 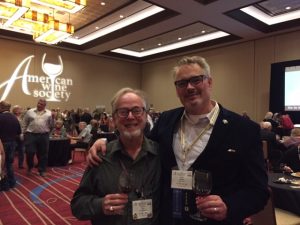 It was also great to see Eastern extension agents like Gary Pavlis (Rutgers, NJ) and Joseph Fiola (U. of Western Maryland). These two friends like to put on tuxedos and do a Rat Pack shtick on wine education. Here’s a photo of the two of them receiving joint awards from AWS for their contribution to increasing wine quality in the Mid-Atlantic through their long-standing extension work through their respective universities. 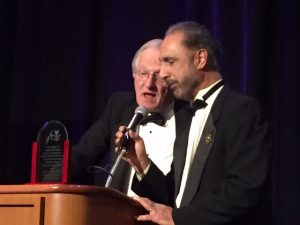 Dr. Gary Pavlis (left) of Rutgers, and Dr. Joseph Fiola (right) of U. of Western Maryland, giving remarks on receiving their awards from the American Wine Society for wine education.

Friday was a busy day for me. In the afternoon, I presented a class titled “Virginia Wine: 400 Years Young and World-Class.” This title is because the Virginia wine industry’s documented start was at the Jamestown Assembly of 1619, but the history of this branch of agriculture in the Commonwealth is so intermittent that its recent renaissance allows it to claim both “400 years” and “young” as adjectives.

In the evening, I presented a different group of Virginia wines, in the AWS grand “Showcase” tasting. For two and a half hours, I presided over a spectrum of fine Virginia wines that ranged from sparkling to sweet dessert. 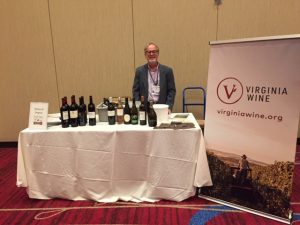 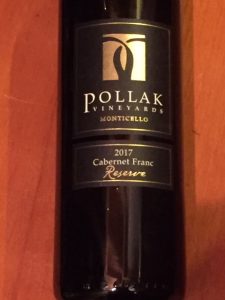 The dessert wine was Rockbridge Vineyards’ perennially popular V d’Or, a cryo-extraction (artificially frozen grapes) wine made from Vidal, Vignoles and Traminette. It became quite popular towards the end of the evening, but the red wines were the real hit. The word got out about Barboursville’s Octagon being available, and people kept coming up saying “I hear I should try the Octagon.”

I also learned a lot in tasting seminars about the dry, diverse wines of Germany, the changes afoot in Portugal, with dozens of indigenous grape varieties, and the re-set on the Cru Bourgeois classification in the Medoc, Bordeaux. Now, once a chateau has been certified as a Cru Bourgeois estate, it can retain the title for five years and apply again. One of the certification requirements is a commitment to environmentally-friendly production, which ranges from the vineyard to packaging (like lighter-weight glass bottles).

Bordeaux is a very traditional wine region, but the re-set of the Cru Bourgeois status is a sign that this region knows it needs to adapt to new circumstances. One of these is the approval last year of new hybrids which are more sustainable (needing fewer synthetic fungicides) than the traditional grape varieties, and could make the difference between a decent crop and crop loss in challenging years.

I was surprised and pleased to see that in several of the Cru Bourgeois wines that we tasted, most of which were fairly evenly split between Cabernet Sauvignon and Merlot, Petit Verdot was now included, and in one case, was about 20% of the total blend! This not only made the color darker, but gave ripe black fruit aromas and flavors along with that lavender and herb aroma of this grape. The result was Bordeaux wines in a new style, with plump ripe black fruits and smooth tannins; a promising change.

The celebration banquet featured a number of awards and presentations of new AWS-trained wine judges like Jay Bileti of Arizona, below. 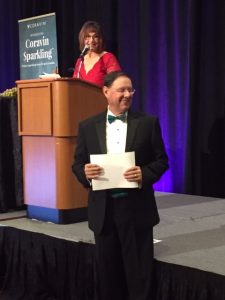 The AWS annual Award of Merit was given to the renowned wine educator and creator of the Windows on the World Wine Course, the best-selling American wine book, Kevin Zraly. Zraly was hired when the World Trade Center’s restaurant at the summit, Windows on the World, hired him to create the best wine list in the country. 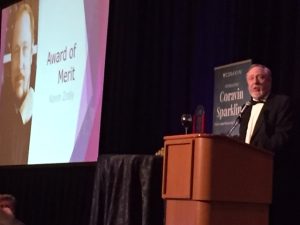 Zraly rose to the occasion but found that the restaurant staff knew so little about wine, that he had to do staff training courses. In the mid-1990s, I attended Wine South in Atlanta, where I sat in on his “The 60-minute wine expert” course. He focused on key grape varietals like Cabernet Sauvignon, Merlot, Chardonnay, Sauvignon Blanc, Pinot Grigio and Sangiovese, and gave an accompanying tasting and lecture that lasted just sixty minutes, but gave attendees what they needed to know for 90% of the world wine market.

One thing I liked about Zraly’s receiving the Award of Merit this year was that he has been a member of AWS since 1973; to prove it, AWS projected a slide of his membership card dated with that year.

Another thing I appreciate about Zraly is that he has supported the growth of the American wine industry. When he learned that wine was being made in every state in the Union (Alaska has to import juice from British Columbia), he decided to write a pocket-book sized guide titled Kevin Zraly’s American Wine Guide (disclosure: he asked me to write entries for most of the states including the Mid-Atlantic, the South, and the Midwest). 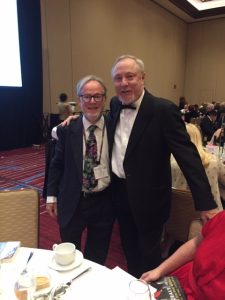 The author (left) with Kevin Zraly at the AWS awards banquet

Finally, I went to the awards ceremony of the Shenandoah Valley Wine Trail (I was a judge in their competition) to give keynote remarks. Wines featured were gold and silver medal winners from the event, and the owners/vintners were on hand to pour them.

As I said in my remarks, the Valley has distinctive terroir; being cooler and drier than the Piedmont east of the Blue Ridge Mountains, the wines are consistently fresh and bright. While we’ve known that cool-climate classics like Riesling, Chardonnay, Pinot Noir and Cabernet Franc grow well in the Valley, one thing the competition results showed this year was that grapes like Petit Verdot and Tannat can also make balanced, ripe and elegant wines when grown on favorable sites there. 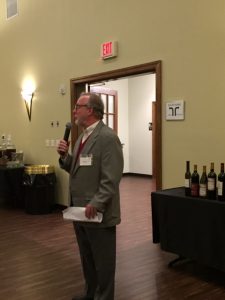 Gold medal wines ranged from a sparkling Chardonnay to the dessert wine V d’Or by Rockbridge Vineyards. Interestingly, the majority of the gold medalists were red wines, proving that even for Meritage blends, Syrah and Tannat, the Valley can make top-quality wines that defy preconceptions. 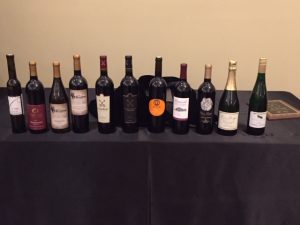 The winner of the Cup competition was Bluestone Vineyards’ Houndstooth 2017, a Meritage-style blend of mostly Cabernet Franc and Merlot. Although the wine was ripe and full-bodied, it was also fruit-driven and had a Valley freshness on the finish.

In his acceptance remarks, Bluestone vintner Lee Hartman acknowledged the assistance that he and others receive from other Valley winemakers; “We’re a very cooperative group,” he said. 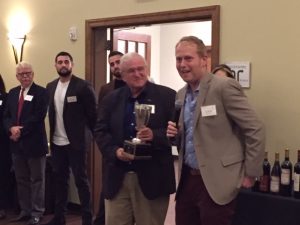 Personally, my favorite new discovery at the Cup was the new winery Briede′ and their use of the red hybrid Arandell, developed by Cornell University and formally released in 2013. Although Chambourcin does very well in the Valley, Arandell could be said to be an improvement on red hybrids; it had aromas and flavors very much like Blaufrankisch, the Austrian grape that also does well in the Valley. I told co-owner Loretta Briede′ that if I’d tasted the wine blind with other Blaufrankisch wines, I may not have been able to pick it out as a different grape variety. She plans to blend it with a little bit of Cabernet Franc as the mid-palate is a bit flat. Cornell describes Arandell as being moderately cold-tolerant but very disease-resistant.

Coming up on my calendar, I’ll be doing author signings of Beyond Jefferson’s Vines, third edition of 2020, the complete guide to Virginia wine, on adjacent days. Friday Dec. 3rd I’ll be at Upper Shirley Vineyards on the James River east of Richmond, from 6:30-7:30, and Dec. 4th I’ll be at Ankida Ridge Vineyards for their annual Feté de Noel (3:30-5:00).

The third edition of Beyond Jefferson’s Vines makes a thoughtful holiday gift, and has a comprehensive listing of Virginia wines with gold and silver medals from the Governor’s Cup competitions in the last few years. I hope I’ll see you there! 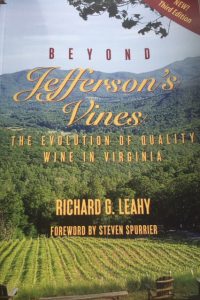 You can also buy copies on Amazon, at