This estate blend won the Governor’s Cup in 2012. It is a Left Bank-style blend dominated by 63% Cabernet Sauvignon, 25% Merlot, and six percent each Cabernet Franc and Petit Verdot. 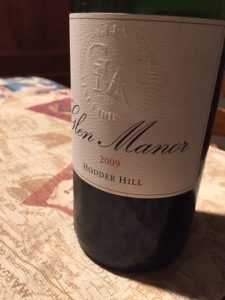 Proprietor and vigneron Jeff White apprenticed under Jim Law of Linden Vineyards, a few miles to the north of Front Royal (Linden is to the south). Law’s model for great red wines is the Haut Medoc of Bordeaux on the Left Bank of the Gironde, where blends dominated by Cabernet Sauvignon are the norm. In fact, his estate Hardscrabble blend usually has a similar proportion of red Bordeaux grapes, leading with 60%+ Cabernet Sauvignon.

It’s important to note that both vineyards are on the western slope of the Blue Ridge Mountains, and Cabernet Sauvignon needs to be grown on well-drained soils in order to ripen and produce quality wine.

I’m glad I waited 12 years to try this wine, and shows why you should also be motivated to lay down some top Virginia reds for a similar period of time to see how time integrates the elements into a mellow, harmonious whole.

I was struck when tasting the wine how much it reminded me of a fine Haut Medoc from a single commune, such as Paulliac or St. Estephe. On the nose, I found ripe cassis as well as white pepper or spice elements; I also had a mental image of crushed granite. Over time, the nose evolved into leather, tea and mocha notes.

On the palate, the fruit was ripe (14.4% alcohol), with smooth tannins, vanilla tones from oak that were appropriate and well-integrated, and the kind of fresh clean finish you’d swear was from a wine of the Haut Medoc.

This wine is at the peak of maturity but should be enjoyable for at least 3-5 more years.