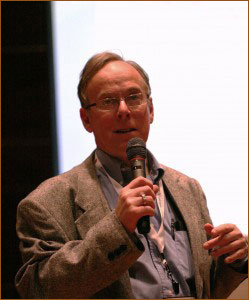 Richard Leahy is a wine author and wine industry consultant specializing in regional wines east of the Rockies. He has been reporting on the wines of Virginia and other regional wine states since 1986. He works with numerous wineries, associations and state agencies, and is the Conference Manager for the largest wine industry trade show on the East Coast, the Eastern Winery Exposition.

His comprehensive book on Virginia wine, Beyond Jefferson’s Vines, in a second edition of 2014, is now available on Amazon and Kindle. He became well-known in the Eastern wine industry as East Coast Editor for Vineyard & Winery Management, and is the Mid-Atlantic and Southern Editor for the ground-breaking Oxford Companion to the Wines of North America (2000), a regional editor for Kevin Zraly’s American Wine Guide and assisted Steve DeLong on his recent Wine Tasting Notebook.

Mr. Leahy is a member of the Circle of Wine Writers, professional organization of leading wine journalists based in the U.K. Richard was the Executive Director of the Virginia Wine Experience in London in May 2007. The event was timed to coordinate with the 400th anniversary of the Jamestown settlement and was a huge success in attracting the attention of leading British wine writers such as Steven Spurrier and Oz Clarke. Richard has consulted to a range of clients from start-up vineyards to well-established wineries, and state wine and agriculture organizations.

“Richard Leahy is a true, high caliber wine industry professional. He knows wines, has an excellent palate and appreciates the business dimensions of the wine industry. He brings the correct background and expertise to consult and assist in a start-up operation of for the development of a winery that sees growth as its objective.”
Patrick G. Duffeler, Proprietor, Williamsburg Winery