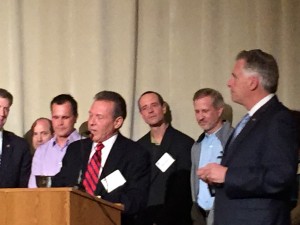 In accepting the Cup from the Governor, Keswick Vineyards’ owner Al Schornberg explained that he and his wife Cindy searched all over for a place to realize their dream of making great red wine, but that they both agreed on Virginia; “And when both people in a marriage agree so much on something, it’s probably a good idea.” He also thanked his winemaker and son-in-law Stephen Barnard, and thanked the Virginia wine industry for being such a supportive, collaborative group of people.

On the nose, the Keswick Vineyards Estate Reserve 2014 had complex aromas of black fruits, sage, basil and bay leaf with a hint of oak in the background. On the palate, the wine had big dimension and volume for a cabernet franc; solid black fruits, vibrant acidity, and elegant herbal tones. This is a lovely food wine and a fine example of first-class varietal Virginia cabernet franc.

In the previous post I listed the 38 gold medal-winning Virginia wines in the competition (all certified as coming from in-state fruit). At the gala ceremony, the wines from that qualified to be served in the Governor’s Case (the top 12 wines of that group) were announced, as follows:

Cardinal Point Clay Hill Cabernet Franc 2014
Solid black cherry on the nose and palate. Rich, full-bodied with smooth tannins. A large style for the cool 2014 vintage but solid and well-balanced.

Horton Vineyards Petit Manseng 2014
Previously made in a dry style, this petit manseng is everything you want in that grape; very fruity, juicy ripe tropical fruit, large volume and full-bodied; tastes off-dry but the three percent residual sugar is balanced with brisk acidity in the finish. Yummy and versatile.

Veritas Vineyards “VR” meritage-style blend 2013
Fun aromatics of bright red fruits and spice. On the palate, the wine is smooth, rich and velvety in the mid-palate, with a long finish of lingering red fruit flavors.

Fabbioli Cabernet Franc Reserve 2012
A nose of bright red cherries with hints of leafy herb. On the palate, wow! Tight, bright, concentrated red fruits, firm acid and a solid mid-palate, racy and will benefit from another year of age.  A cab franc you can enjoy in the summer.

Keswick Vineyards Signature Cabernet Franc 2013
A fine cabernet franc but slightly different from the Cup-winning 2014. Deeply dark for a cab franc, with a complex nose of scented damson plus and black cherries. On the palate, firm solid black cherry but still lively, fresh and stylish.

Gadino Cellars Nebbiolo 2010
Nebbiolo has a good track record in Virginia for wineries who know how to treat it in the vineyard (cane pruning mandatory) and in the winery (high acid/high pH). This is a lovely, mature nebbiolo you an enjoy right now or next autumn. The nose has scented rose petals, truffles and clean forest floor aromatics and reminds me of Gattinara. On the palate, it is mellow for nebbiolo, round, well-integrated, mature and easy to enjoy.

Granite Heights “Evening Serenade” 2010
A “Right Bank” style meritage blend of 80% merlot and 20% cabernet franc. Nose: classic markers for St. Emilion: scented red and black fruits with herbs and base notes of mocha and clean earth. On the palate, layers of fruit with mocha in the finish and herbal notes; rich and plush but with a fresh lingering finish. As classy, and classic a “Right Bank”-style Virginia blend as I’ve tasted.

Barren Ridge 2010 Meritage
This classy petit verdot-based blend also won a gold medal last year in this competition. The nose is smooth, rich, dark and smoky. On the palate, black fruits and lavender and herb notes. On the palate, the plush dark petit verdot (45%) dominates, with a smooth lush texture. Mature, drink this year.