Visits to Wineries in Delaplane, Opal and Woodstock in Feb. 2016

Just prior to the big Governor’s Cup and Case announcements, I was on the Virginia wine trail, doing a book signing at Barrel Oak Winery, visiting the new and nearby Blue Valley Vineyard and Winery, and on the way back to Charlottesville, stopping at Granite Heights Winery which won three gold medals in the Governor’s Cup Competition.

Barrel Oak is a busy place on weekends, even in February. A Valentine’s theme brought lots of people to the winery despite the howling winds, and there was a special SPCA drive; volunteers walked around carrying dogs with “adopt me” vests and hearts. How could you resist?

While sitting near the door doing the book signing, it was very gratifying for me to see:

1) how many visitors there were on a frigid, windy February day,

2) how many of them brought their dogs

3) how many of them brought small children, many in strollers.

This kind of crowd can be relied on not to get drunk or disorderly. It was great to watch humans and canines enjoying themselves and having a wonderful time. Good wine, food and a warm fireplace helped. Also, BOW had a full crew of workers on board to welcome people as soon as they walked in the door, and at a number of wine pouring or food stations. This winery walks the walk in welcoming its customers.

Located on a hilltop knoll visible from Barrel Oak Winery, Blue Valley Vineyard & Winery has 12 acres planted to 17,000 vines. Visibly impressive from a distance, the winery is stunning from the front entrance, resembling a 21st century interpretation of a Tuscan Villa with field stone construction. Inside there is an upper gallery, an events space to the right and left, and a generous tasting bar area, with lots of windows with a view west to the nearby Blue Ridge Mountains.

The wines currently in the tasting room are mostly from West Coast fruit (crushed and processed on site), awaiting maturation of the estate vines, which produced their first crop in 2015. Still, these wines are pretty impressive. The whites all have fine fruit/acid balance, while the reds (from Lodi, CA) are rich and robust. One of my favorites was the rosé of chambourcin (from Virginia grapes), 2014 vintage. The nose had lovely fresh cranberry and maraschino cherry notes. On the palate, it was dry, vibrant, juicy and fresh with cranberry and red cherry fruit. Classy and perfect for warm weather enjoyment.

I also enjoyed the pinot gris (Washington State), sauvignon blanc (California) and barrel fermented chardonnay (Washington State), all of which could pass for Virginia white wines with delicate fruit/acid balance and moderate alcohol. The reds were clearly of Lodi, CA terroir, but on a windy February day, that wasn’t a bad thing. Best was the cabernet franc 2013, with aromatic bass notes of black cherry and cola. On the palate the wine had fresh cherry flavors with a crisp finish, fresher and more varietally classic than the other Lodi reds.

According to owners John and Stergio Zissios, “The Zissios family [from Macedonia] believes that the key to making good wine is patience and attention to detail; a motto which is upheld daily by the family and guided by three generations of vintner expertise.” Stergio says they are on track to produce 10,000 cases, and that the estate white wines made with their own fruit in 2015 have already won awards in competitions. Last year Blue Valley entered all of its wines in the American Wine Society wine competition, and was the only winery in that competition to have all entries awarded some medal.

Based on what they have done with out-of-state fruit (and in-state chambourcin), we can look forward to enjoying some fine Virginia wines from this new elegant winery with splendid facilities and views in the near future.

I think it’s great that a small winery (12 acres of vines) where both owners keep their full-time day jobs are able to win three gold medals in the Governor’s Cup. These included:

Of these, my favorite was the “Evening Serenade” which was a compellingly brilliant interpretation of classic St. Emilion Grand Cru. An 80/20 blend of merlot and cabernet franc, this richly elegant wine had aromatics of red and black fruits and herbs with bass notes of clean earth. On the palate, it was richly layered, with red and black fruits followed by herbal notes then mocha and clean earth with smooth rich tannins. A class act!

The Lomax Reserve (cabernet sauvignon-based) was spicy and smoky but with bright red fruits. The humility 2012 (41% merlot, 27% cabernet franc, 14% cabernet sauvignon, 9% ea. barbera and petit verdot) had zesty red fruits, but with depth and mocha texture on the palate, a brilliant “Right Bank” style).

Other Granite Heights wines I especially enjoyed included the Chardonnay 2014, a fresh, St. Veran-style with ripe green apple and pear flavors, off-dry, round mid-palate and fresh bright finish; the Barbelo 2010 (80% merlot and 20% late harvest barbera), with dark fruits and a spicy, punchy clean earth and cigar notes palate with a fresh, lingering finish; and the Ashby Reserve port-style tawny wine. The nose and palate were of mellow red and black fruits…with mocha powder! On the palate, it was rich and plump, with strong suggestions of mocha, and mental images I can’t share in this blog post (I bought a bottle and shared it with my girlfriend to enthusiastic reviews).

I should say that all of the Granite Heights 2011 reds that I tasted were among the best of the vintage; clean, fresh, varietally correct, balanced and also ready to drink. If you want classy Virginia reds to drink in warmer weather from spring to fall, you can’t do better than the Granite Heights cabernet franc, Evening Serenade or humility. 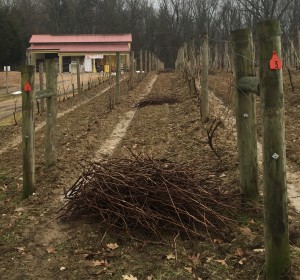 A year ago Muse Vineyards (with winemaker Tim Rausse) made a grand entrance on the Virginia wine scene by winning the 2015 Governor’s Cup with their 2009 meritage-style blend, “Clio”. The 2010 vintage of this wine was my favorite red of 2015, but didn’t earn a gold medal in the Governor’s Cup competition. The judges missed out but you can order the wine online, or visit in person when their tasting room opens sometime this spring (east of Woodstock in the Shenandoah Valley AVA).

Here are my tasting notes for the 2010 Clio:

An even four-way blend of the two cabernets, merlot and petit verdot. The 2009 vintage of this wine won the 2015 Governor’s Cup, and it wouldn’t surprise me if this wine won in 2016. It’s a very different style from that wine though to match the ripe, rich and warm character of the 2010 vintage. Opaque, almost black in color, the nose is complex with ripe black fruits, rich oak tones, and hints of herbs, pepper and clove. On the palate, the wine has huge volume (14.4% alcohol), but is ripe and smooth, with loads of smooth tannins to match an opulently rich blend of black fruits. This blend of Muse (four equal ratios of the two cabernets, merlot and petit verdot) has worked brilliantly two years in a row in very different vintage conditions, and could be a model others learn from. This is my favorite red wine of the year and is on a par with any other Virginia red wine I’ve tasted.

I decided to taste their current line-up, and was impressed with the consistency of quality across the board. Some people might think that the Cup win was a chance one-off last year, but the quality is top-notch, and the lack of awards may be attributed to wines of finesse and understatement, not lack of quality.

The Muse Rosé 2014 is grenache-based. The color is faint but the wine is a fine Provençal style, with a nose of fresh creamy cherries. On the palate, the wine is round and smooth, then finishes with bright fresh cherry flavors.

Muse Chardonnay 2014 is an elegant, Puligny-Montrachet-style barrel fermented chardonnay. The nose starts with fresh green apple and citrus, then a hint of almond from neutral French oak. On the palate, there’s a fine balance of fruit, lees and oak influence, with a round texture but bright fresh apple/citrus flavors and lively finish.

Muse has sold some of its grenache to Blenheim Vineyards but I’d never had a varietal Virginia grenache before. The grape has a reputation for rotting easily so I was eager to try it. This wine has a classic varietal nose of fresh raspberries and white pepper which grew stronger with time. On the palate, clean fresh raspberry flavors were followed by a fine mineral finish, in a Rhone Valley style. Very classic and impressive.

Co-owner Sally Cowal showed me what the fine 2015 vintage has to offer by pulling some tank and barrel samples.  First was the Rosé, a blend of grenache and mourvedre. The color was light but with a vivid pink hue. On the nose, it showed bright fresh vividly fruity red cherry and plum aromas, and on the palate, was round and smooth at first, with a big burst of berry fruit on the mid-palate, firm acid on the finish, and good fruit/acid balance; very promising and stylish.

Next was the 2011 Clio, an equal four-part blend of the two cabernets, merlot and petit verdot. Color: impressively dark ruby. Nose: clean, fresh black fruits and some read cherry, with spice and flint notes. On the palate, it gives me the same burst of intense fruit I had tasting the 2010 and 2009 vintages. Layered texture with black and red fruits. A much lighter style than the previous two, due to the light vintage, but impressive considering the challenges.

A 2015 tank sample of sauvignon blanc was a pleasant surprise. The nose was a classic Loire Valley style, with subtle lemon/herb and mineral notes. On the palate, the wine was bright with intense lemon and ripe pear flavors, with a fresh clean finish. Pretty stylish for a tank sample, and a nicely original take on this grape.

A couple of original white wine samples included the 2013 Roussane/Viognier from a large neutral barrel, and 2015 marsanne from the tank. The roussane/viognier blend had a nose of spicy prickly-pear fruit. On the palate, it was round and full, with white pepper notes and ripe pear fruit, and the texture was round and fleshy. The marsanne had a nose of bright citrus/lemon with mineral/spice elements. On the palate, a burst of rich, ripe pear fruit with hints of white pepper and bright acid; a stylish, original wine.

Finally, a barrel sample of the 2015 chardonnay, also barrel fermented and resembling the 2014, but with more plush, rich texture without sacrificing balance; a sexy chardonnay!