The Fourth Annual Virginia Wine Summit, an event aimed at educating trade gatekeepers like sommeliers and wine retailers on current trends in Virginia wines, took place April 5th at the Salamander Resort in Middleburg. The event was a resounding success, selling out at 250 attendees with a waiting list of 20, and featuring expertly matched foods and wine, thoughtful and relevant breakout sessions  to a keynote address by Jon Bonne, author of The New California Wine, to concluding remarks by Governor Terry McAuliffe.

Panel moderators (including this writer) and conference speakers were treated to a day prior to the conference in Loudoun Wine Country, tasting the wines of Breaux Vineyards, Fabbioli Cellars, and a dozen non-local producers from around the state. The night before, they had an exquisite wine dinner at the L’Auberge Provencal  in Boyce, pairing top Virginia wines with carefully chosen cuisine. 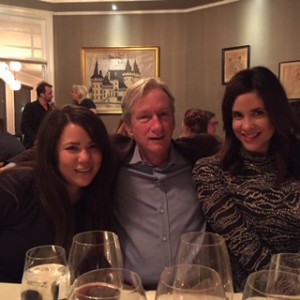 Jay Youmans, MW and Panel Moderator at the Summit, with Megan Womack (left) and Susan Kramer (right) of the Virginia Wine Marketing Office at the L’Auberge Provencal

The conference began with a plenary session moderated by Jay Youmans MW on Virginia white wines, in which four pairs of varietals were tasted, one each of which was a Virginia wine unknown to the audience. A panel of sommeliers commented on the wines and speculated on which might be the Virginia wine. The varietals included sauvignon blanc, viognier, chardonnay and petit manseng.

The quality of all pairs of wines was well-matched, but flouted the conventional wisdom that Virginia wines are overpriced. The King Family Vineyards viognier 2014 was $26.95 compared to a Condrieu viognier from France at $53. Likewise, the Fox Meadow chardonnay was also in the $20 range, while its pair, the Chateau Montelena Napa chardonnay, was $50. 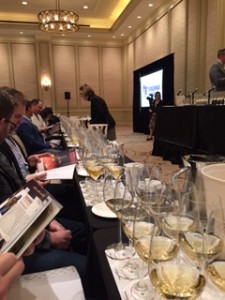 The conference starts with a blind tasting of four pairs of varietal white wines.

The white wine tasting was followed by break-out sessions such as “Talk Dirt to Me“, which compared and contrasted the soils and wine styles of  the Northern Virginia Piedmont with those of the Monticello AVA near Charlottesville.

Lunch featured a keynote address by Jon Bonne, author of The New California Wine. Bonne pointed out that “commercial success” (such as millions of cases sold under $10/bottle in supermarkets) is not the same as “cultural success“, or the reputation that a region has for its specialty grapes or wine styles, and for the quality of these wines. He noted that Washington State and Long Island are still struggling with how to define themselves culturally in the commercial wine market, and that “Virginia should congratulate itself for how far you’ve come in such a short time“. 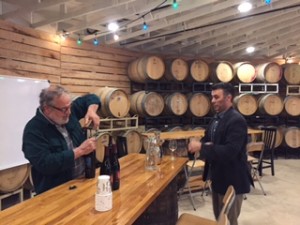 Bonne said that “greatness is not achieved without humility“, and that Virginia has done well to avoid the temptation to copy California’s model. In fact, he believes it is a mistake for a new wine region to use famous templates to brand themselves as “the new Burgundy or Bordeaux“.

He sees Virginia wine quality as being solid, and notes that the state has gained favor in influential circles such as London, but says that the next step should be for Virginia wine to position itself to further build on its reputation, especially in the on-premise trade. “It’s important to get visibility in restaurants,” he pointed out.

After lunch were more break-out sessions, including a panel moderated by this writer on “Why Chardonnay Matters” (which should probably have been named “Why Virginia Chardonnay Matters”). Roughly half the audience were Virginia wine producers themselves, and an accomplished panel of four sommeliers (Neal Wavra, Julie DeFriend, Julie Dalton and Andy Charbot) tasted through five Virginia chardonnays with the audience and discussed issues of quality, style, what great chardonnay tastes like, and how the grape has improved greatly in Virginia in recent years.