The 2016 growing season for Virginia vintners had hardly begun when it took a hit from up to three different freeze and frost events that reportedly have hit the early-budding white winegrapes like chardonnay and viognier, especially on the nights of April 6th and April 10th. 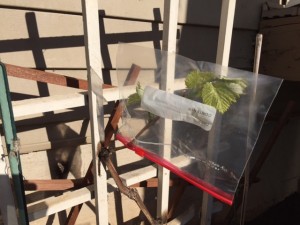 A traminette vine in this Belmont (Charlottesville) townhouse vineyard can use zip-lock bags to protect leafing buds in a freeze, but not commercial vineyards

Warm wet late weather led to very early bud break and shoot development, as was the case in 2012. Unfortunately, warm weather lulled the vines into pushing buds into leafing out in many locations, and in the first week of the month several cold nights below freezing, followed by warm daytime temperatures which encouraged more budding from the canes, which in turn were damaged from further night time lows in the low 20s F.

The cool Shenandoah Valley area fared best since buds had not opened yet, but locations in the south and east of the state where warm weather encouraged rapid bud break and leafing, were the hardest hit. In the Monticello AVA, those in the northwest had mild to moderate damage and are estimating 20-25% crop loss on chardonnay (the state’s most widely planted grape). “My sense is that Virginia lost as much as 25% of its potential grape crop with the two frost/freeze events, and much of this reduction will be borne by chardonnay, cabernet franc and merlot,” said Tony Wolf, state viticulturist, after reviewing injury reports.

Tom Kelly is President of the Virginia Vineyards Association (VVA) and confirms that damage varied widely based on location and grape variety. For his vineyard in Northern Virginia, “On the whole, we’re probably looking at about 25% of buds injured at the upper end [with chardonnay the most vulnerable] and as little as 5% at the lower. On the upside, all of my clients with chardonnay employ double pruning so most of the count buds on spurs were still dormant and not injured. It would seem that those who waited the longest to prune fared the best as their buds were the least developed (or furthest behind) when the cold air moved in.

“I’m hearing much worse news from Central Virginia with some reporting 80 – 100% buds injured on chard, merlot and other early varieties. I spoke with Tony Wolf today and he told me that there are similar reports from other regions south of us as well.”

Barboursville Vineyards, with close to 200 acres of grapevines, is one of the largest vineyards in the state and due to its location in the east of the Monticello AVA, sustained some damage. General Manager Luca Paschina explained “We have so far experienced a heavy  loss in chardonnay (20-25%) and on nebbiolo about  50%, much lower and between  5%-15% on Merlot, Cabernet Franc, Viognier, Petit Verdot, Fiano, Vermentino” (all the remaining varietals were still behind and suffered no damage due to later bud-break). “Honestly the outcome is rosier than I thought it would be,” he concluded.

Keswick Vineyards in the southeast of the Monticello AVA was an example of a site that was hard hit, but not for lack of trying. The Schornbergs called “all hands on deck” from employees and hired two helicopters to sit over the vineyards while “dragon” machines belched horizontal flames down vineyard rows and straw bale fires attempted to raise the temperature in the vineyard to avoid frost damage to the tender leafing from the early budding chardonnay and viognier vines…in vain, according to Cindy Schornberg and winemaker Stephen Barnard. White the later-budding reds avoiding damage and the baby verdejo vines don’t have a crop yet, the chardonnay crop there was virtually wiped out, with an estimated 90% potential crop damage in the viognier.

Rock Stephens on the Eastern Shore ran his Orchard Rite windmill all night from Tues. 4/5-Wed. 4/6 but “temperatures crept down to a low of 27.4 by 6:25 a.m.” despite the maritime effect of the Bay and the Atlantic Ocean.  “We are cordon pruned and a large portion of the Chardonnay was at 1-2 leaves. I would estimate a 20%-25% crop loss on the chardonnay.  On the merlot it is too early to tell.”

Double Caning and the Silver Lining

In the spring edition of the VVA newsletter, Tom Kelly says that with a couple of severe winters recently, many vintners are delaying winter pruning and “double caning” with early-budding varieties like chardonnay. The most fruitful buds are the basal buds, which are the last to open. As Jeff Sanders, proprietor of Glass House Vineyard explains, “My vinifera is cane pruned and many of my canes had been left long, because the forecast had been calling for this cold april, event back in mid-march.    So while I had many buds out in Chardonnay, Pinot Gris, Barbera, and Merlot, most of them were at the tips of the canes (where the buds grow first almost always) that we plan on cutting off anyway.

“Overall, I think I experienced some loss, maybe to 20% in Chardonnay, and some loss maybe (5-10%) in Merlot, Barbera, and Pinot Gris.   Since I cane prune Viognier, I also experienced loss there, maybe 5-15%. ” Sanders is on the Appellation Trail in northwestern Albemarle, where bud development was not as evolved as in areas to the south and east.
“I recommend to my clients who spur prune to employ a technique called double pruning where spurs are left long at about 6 or more nodes and only cut back to the required 2 “count” buds after those more basal buds have emerged,”  says Kelly.
Leaving more and longer canes through the winter means a compressed pruning regimen at the start of the season, but it’s cheaper than paying for hovering helicopters. Along with the transition from cordon to cane pruning and to high-density vine spacing, double pruning will likely become SOP for Virginia vintners to minimize spring frost damage to the potential crop.