Jump Mountain Vineyard: Tiny but Stylish Winery Worth the Trip

One of the smallest, and most obscure new Virginia wineries is Jump Mountain Vineyard, which opened in 2012 some 15 miles north of Lexington. Although it’s not far from the intersection of interstates 64 and 81, Rt. 39 and the Valley Route 11, it’s only open on weekends, and then by appointment, with no helpful signage from the main route Maury River Highway Rt. 39. 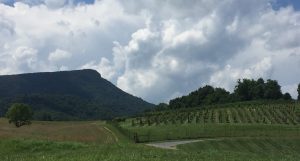 The aptly-named Jump Mountain looms as a fine geologic landmark the closer you get to the winery, until you turn in at the gate and get a breathtaking view of the mountain looming above, with vineyards in the foreground.

Owners David Vermillion and Mary Hughes purchased the 32-acre farm in 2006, planting their first vines in 2008. They chose the site for its warmth, low humidity and rainfall, well-drained soils and cool night temperatures (for malic acid retention in the grapes), with an elevation of 1330 ft. For a site in the western mountains, they raised some eyebrows by planting cabernet sauvignon, but the wisdom of site selection has validated their choice.

While cabernet sauvignon dominates the volume of wine production, with two varietal labelings (2012 with 12% tannat and 2013 100% varietal), they have diversified, with a look to northeastern Italy and Austria. Their one white currently is a varietal gruener veltliner from 2015 (their 2014 has sold out), and they have a fun, fruity and dry Italian blend of refosco, lagrein, sagrantino and the two cabernets.

They opened at an unfortunate time for a new vineyard in Virginia. The last three winters they’ve been whacked with the polar vortex killing young vines, and spring frosts killing the potential crop on many vines especially the cold-tender sagrantino and tannat. David confides that in 2014 their total production was less than 200 cases or around 3 barrels worth, due to crop losses to winter kill.

The good news is that Mary and David haven’t given up, and have re-planted dead vines with new ones on more low-vigor-appropriate rootstock. One reason why their wines are so flavorful is that the low vigor of the site reduces berry size, with a greater phenolic/flavor compound ratio to water in the berries than with a more vigorous site. Another reason is that their site soaks up the heat in late summer, but Jump Mountain blocks the west wind, allowing a warmer south wind up their valley as far as their site. “We’re right on the [mesoclimate] frontier,” says David. At the same time, cool air flowing down from nearby Jump Mountain keeps nighttime temperatures low, retaining good malic acid levels in the grapes, where vines planted say in the lower Piedmont would lose malic acid with lower levels of diurnal variation in temperature.

Right now, there are just three wines available at the winery, but Market St. Wineshop in Charlottesville carries them. I still think the trip out there is worthwhile if you’re driving between Lexington or points south or west and Charlottesville, for the views and lack of tasting room craziness (note: you have to call and make an appointment to taste the wines on the weekends, and they’re not open weekdays.) Jump Mountain has King Family Vineyards winemaker Matthieu Finot as their consultant winemaker.

Gruener Veltliner 2015: aged on the lees in a used Burgundian oak barrel. Nose: definite varietally characteristic white pepper and wax bean, not fruity but aromatic. On the palate, dry, full, round but large volume, with prickly pear texture and spiciness. Young, will evolve; stylish, will be great with seafood and chicken in cream sauce.

Cabernet Sauvignon 2012: (12% tannat) Nose: mature, spicy with black cassis, smokey and gamey, intriguing, like a barbera/dolcetto blend or a Rhone blend. Palate: light-bodied but zesty, dried red fruits, smooth and spicy, versatile, mature and fun. You think of other grapes than a cabernet sauvignon when tasting it, but it’s much more interesting than many of them.

Cabernet Sauvignon 2014 (will be released in October, has a bit of tannat). Color: very dark. Nose: ripe black fruits, evolving into black currants and black cherries. Palate is zesty and fresh with bright acidity and fruit-driven. Lively black fruits and firm but ripe tannins, reminiscent of a Northern Italian red or a cabernet from Southeast Seneca Lake (the Finger Lakes). Young but will drink well in 18 months and hold for a decade; only 82 cases made.

Italian Blend Yet to be Named, 2015: Includes refosco, lagrein, sagrantino and the two cabernets. This is the first vintage these grapes have been blended. Nose: fragrant ripe cherries and strawberries, and roses. Palate: firm acid, with zesty sour cherries and red apple. Very bright red fruits with lively acidity, a great warm weather red wine. Still in barrel, promising potential, original and stylish.