Dr. Konstantin Frank Riesling Reserve 2001 Finger Lakes: This wine is an excellent argument for laying down top Finger Lakes rieslings for 15 years or more. This wine won a gold medal in its youth, but was lean and tight; a good sign for a long-distance runner. I’ve written before on the virtues of laying down fine rieslings from classic regions (Alsace, Austria, Finger Lakes, Oregon, Michigan and Washington) and how the aging curve is “U”-shaped, going into a decline on fruitiness after the first two years, then emerging after ten years plus with a renewed fruitiness, complemented by tertiary aging characteristics like mellowing of acidity and petrol. 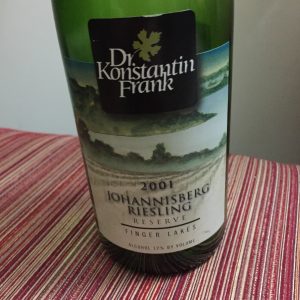 This wine, admirably, has almost no petrol on the nose, but fresh lemon/lime zest, white flowers and some ripe apple; there’s a hint of petrol in the background which grows gradually. On the palate, light, fresh, lively and surprisingly young, with finely integrated zesty acid and ripe apple and citrus fruit, and a long lingering freshness on the finish. Who would guess this was 15 years old? Interestingly Meaghan Frank, fourth generation descendant of Konstantin and current winery general manager, gave me a bottle of the 2008 dry riesling a few months ago. It was developing well but I told her I thought it needed more time; it was barely waking up from a long slumber. This 2001 reserve is singing sweetly.

Rockbridge Vineyards De Chiel Viognier 2015: This is the debut release of this premier white wine for Virginia, from a local grower, and it’s my favorite of the vintage for that grape so far. The nose is subtle, then intense with white flowers, white fruits, and lively acid to balance on the palate. If you like a viognier that isn’t all honeysuckle and is good with food, this is it. Great way to debut! 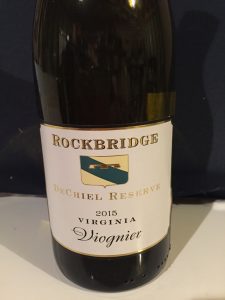 Cardinal Point Green, 2015: A fun, original wine that was modeled on vinho verde from Portugal, but has evolved a bit stylistically, and in a good way. This wine was a 50/50 blend of chardonnay and petit manseng, and with the high acid of the latter, the wine is full of green and yellow apple flavors with lime/citrus, but at the same time, isn’t as edgy as vinho verde normally is since the alcohol is 12.9% (the petit manseng was 24 brix or 13.2 potential alcohol when harvested). I found myself quaffing a lot of this at the Tins for Tunes event at the winery in August; a great product for a d___n hot summer. 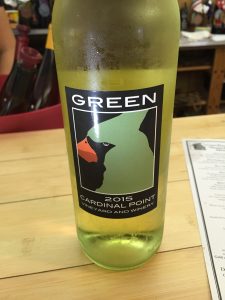