In the midst of October Virginia Wine Month, we should toast the success of one of the few iconic wineries that has helped make a reputation for Virginia as a world-class wine region. Barboursville Vineyards in Orange County, in the town of that name, was established 40 years ago this week by Gianni Zonin of Zonin wines, Italy’s largest family-owned wine company. The first general manager and winemaker was Gabrielle Rausse, who now has his eponymous winery between Jefferson Vineyards and Blenheim Vineyards south of Charlottesville and is also the Director of Gardens and Grounds at Monticello where he re-planted Thomas Jefferson’s vineyard (grafted to American rootstock) based on the list of varieties in Jefferson’s Garden Book. 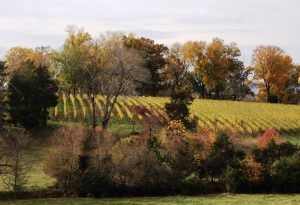 Barboursville Vineyards in late autumn, 2014 (from the parking lot next to the winery)

Gabrielle recalls that the state of Virginia was very skeptical in 1976 about prospects for commercial vineyards growing the European vinifera varieties like cabernet sauvignon, merlot and chardonnay. Thomas Jefferson, a wine lover and avid gardener, had tried for 30 years to do the same without ever realizing a crop. Gabrielle recalls the then-Secretary of Agriculture showing him a box of cigars, saying “This is the future of Virginia agriculture.”

In 1990, Luca Paschina, a native of Piedmonte in northwestern Italy, came to Barboursville to be the new General Manager. Although the exclusively vinifera vineyards had survived and produced commercial crops, he realized that some varieties (riesling, pinot noir and gewürztraminer) would not be sustainable in the humid Central Virginia climate, and that training systems, in-row vine spacing and even clones (such as with cabernet sauvignon) had to be changed to get the best potential out of the site.

Luca shares a respect for the dynamics of the site, and how to “listen” to what it tells him, with another highly respected Virginia vintner, Jim Law of Linden Vineyards in the hills of western Fauquier County, who began his winery in 1985. Both men have changed grape varieties and fermentation styles to produce wines that the site “wants” to produce, instead of imposing an idea on the wines. 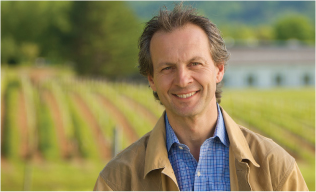 I interviewed Luca for a cover story in a major trade magazine in 2002, and was impressed that Barboursville did not rest on its laurels but was always striving to improve, while “listening” to what the vines and varieties were telling him. For example, he shared that using oak for aging viognier was a mistake, and since then until the release of the 2015 Fiano, the only white wine at Barboursville that saw any oak was the reserve chardonnay (partially neutral French oak). He also replaced the older plantings of cabernet sauvignon with the earlier-ripening ENTAV clone #337 which ripens about the same time as chardonnay, a month earlier than older UC-Davis clones. He introduced, and has found a winning varietal ratio for Octagon, the premier red Bordeaux-style blend that has made Barboursville’s reputation as a consistently top Virginia red wine producer. He planted classic Italian varieties, and while some (sangiovese and barbera) are hit-and-miss, the nebbiolo has been proclaimed world-class, and he recently introduced the elegant, classy white Italian varieties vermentino and fiano.

Luca’s patient work over a quarter-century has paid off. Barboursville Vineyards has won Governor’s Cup, the top honor in the state for wines, four times, more than any other Virginia winery (note: some top wineries like Linden do not enter the competition). Barboursville wines are sold today in 14 states and the U.K. (by Broadbent Selections). As if all this were not enough, Barboursville has an onsite restaurant, Palladio, featuring seasonal northern Italian cuisine, designed to complement the food-friendly wines, which has made a well-deserved reputation for elegant dining.

A year ago, Luca was invited to the Governor’s Mansion in Richmond where he had just returned from representing Virginia wine with Octagon 2010, at “Wine Spectator’s” invitation to the World Wine Experience in New York, to find himself the focus of not one award, but two. First was Luca’s induction into the Italian government’s Order of Merit, its highest honor for civilians, given by the Italian ambassador, then the Atlantic Seaboard Wine Association’s Monteith Trophy for “exceptional contributions” to the reputation of wines of Virginia and the East Coast.” At the event Luca also announced his achievement of American citizenship. Nearly a year later, Luca was invited to a Columbus Day celebration at the White House in honor of outstanding Italian Americans.

In my comprehensive book on Virginia wine, Beyond Jefferson’s Vines (2nd edition 2014) Barboursville Vineyards merits a long entry, and includes tasting of the benchmark 2010 vintage with Luca in 2011 when that wine was still in barrel. Since then the reputation of Barboursville has grown much more. Their annual production is now 40,000 cases, one of the largest in the state of Virginia.

Last week I sat down to a tasting of Barboursville’s benchmark wines with Lindsey Parris (Level III Diploma holder from the WSET and a student in the Master of Wine program) with associate winemaker Daniele Tessaro. We met in the elegant Library 1821 where one can pay a bit more and taste the finest Barboursville wines including some library vintages, preserved with an inert gas system. Here are my top tasting picks: 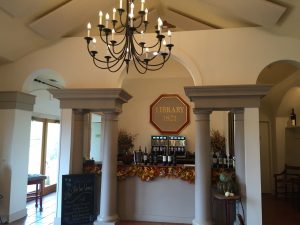 Barboursville Vineyards Fiano Reserve 2015: This debut release from two-year old vines revealed a complex and waxy wine with lots of dimension and texture to complement a range of foods. The nose had a fascinating lemon/citrus fruitiness mingled with mineral, followed by spicy pear and ginger notes. On the palate, there was medium-plus weight, as with a gewürztraminer or Alsatian pinot gris, rich and layered but finishing with firm acidity. There was an oak component on the palate as well (neutral) which integrated well with the pear/ginger flavors, ending with a flinty minerality. A hefty white wine, good for fall/winter cuisine featuring winter squash, such as with Thanksgiving. Daniele says that the use of neutral oak barrels were a fluke due to lack of stainless tank space, but this white did not suffer from the oak. Original and stylish.

Barboursville Vineyards Vermentino Reserve 2015: This white aromatic Italian variety is well-known on Sardinia. If you like pinot grigio, and can think of it as an Alfa Romero, then Vermentino is like the Lamborgini of Italian white wines; sleek, racy, fast and stylish. There are fine lemon/citrus aromas and flavors, with white flowers, followed by ginger and pear flavors on the palate but with the quick raciness on the finish you associate with riesling. Delicate but firm, stylish but will develop over the next 1-2 years. 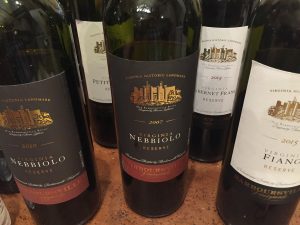