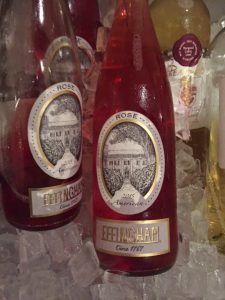 The owner is Albert Guber who is also a partner with Chris Pearmund and other investors. Pearmund is a long-established Virginia vintner and owner of Pearmund Cellars and Vint Hill Craft Winery.

I tasted both the King’s Ransom and the meritage (both from 2014) and was impressed with their finesse. The dry chambourcin rose is zesty with lots of strawberry and cranberry and refreshingly dry.

“Effingham is the highest rated winery ever in the county, to not open [yet]”, says Pearmund. He points out that the same rose also won “Rose of the Year” in the Indy International Wine Competition.

Pearmund shares that he is impatient that “The feds are slow” with issuing the winery an operating license despite having received the correct paperwork; he points out that partners have invested $3 million in the venture. The partners should be pleased with so many high accolades for a winery that hasn’t opened yet; Effingham Manor Winery looks to have a bright future.