The First Vineyard and Winery for Bath Co. In R&D Phase

I was driving to the Homestead in early April when I saw end posts behind a brick wall which sure looked like evidence of a vineyard. On the way back, I turned and drove up the driveway for a closer look. I came upon what looked like (and turned out to be) a research vineyard about half an acre in size. Holding an umbrella in one hand at a 45 degree angle, I walked down the ends of the rows and took note that there were a lot of different varieties, some on two different rootstocks.

The friendly Lee Church hailed me and, telling me that I “looked like I knew what I was doing”, invited me up to buildings above to meet Raymond Turner of Chateau Donze, who explained that this was a research project to gather data from a range of vinifera and hybrid grapes, to determine what was most suited for planting in Bath County, which would be the first commercial vineyard there. 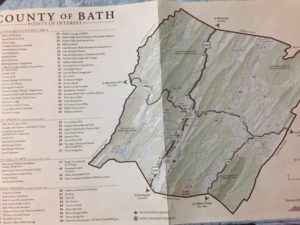 Ray in turn referred me to owner Robert Donze, who with his wife Rhonda are both USAF officers, retired.  Post USAF retirement, Bob and Rhonda started an system engineering and DoD contracting company with 150 employees.

When I asked what drew them to Bath County, Bob replied “The character of the people and the beauty of the mountains keep Rhonda and I in Bath County.” He added that what first brought him to Bath, was “An Early American history lesson from grade school  stuck in my young brain over 50 years ago.  This lesson described Thomas Jefferson bringing French guest to this frontier hot mineral ‘Bath’. So when I retired from USAF, my youngest son and I took off on a whim to locate this hot mineral bath.”

He explains that he grew up in a large farm family, which always made local community-use wines.  “I have country and farming in my heart.” During the last 15 years when his wife was in the Air Force, he searched the Virginia counties to find an environment similar to his home town where he could move his engineering company back-office, create local employment opportunities, and share in the peacefulness of the plush Virginia Mountains and the character of its people.  “However, I was taken with the vegetation and fertile soil in Virginia mountains.  I found this and more in Bath County.”

With his engineering background, Bob has combined deep empirical research with patient observation.  “We had visited vineyards around the world…I arrived at the belief that the Virginia mountains (above 2600′ elevation) would both delay bud break and cold temperature snaps would settle into the deep valleys, thus protecting the vines better than in Central Virginia.” Over six years, he made observations of delayed frost events (normally 3 weeks later in spring and fall) and the shielding that the steep terrain provided from the cold winter temps and winds in deep winter. “My anecdotal observations supported a conclusion that Coles Mountain [a short distance west of Hot Springs and the Homestead] provided a unique vineyard site with a steep southern slope and an eastern tilt, soil tested good for grapes, steady winds were driven by convection heating and cooling, rain adequate, solar heating may be marginal, and day/night temperature swings were nice.” He adds that his limited research shows that the climate there matches regions in Northern Italy more than most of Central Virginia.

The site where I found the test vineyard is known as the  “Old Valley High School” complex,  started in 1919 and completed in 1920’s.  This will eventually be the Rock Roadhouse Winery. The Coles Mountain site  is mostly in a non-commercial conservation easement, with a test site of 10 acres. A methodical and patient man, Bob explains “The initial vineyard test results should be published in Fall of 2020. The test will not be completed and decisions made until the associated wines are evaluated. I expect a final test report in 2022.”

The test varieties so far include: for whites, riesling and four hybrids; cayuga white, aromella, traminette, valvin muscat and vidal blanc. For reds, there are the vinifera varieties cabernet franc and lemberger (a k a blaufrankisch),  and dornfelder, with hybrids regent, corot noir and landot noir. Bob has a detailed spreadsheet with each variety noted for factors like when it breads bud and when it ripens, which USDA climate zone it’s optimal for, which training system it’s on, which soil type, and even breaks down data by rootstock type, with up to 3 per variety.

With his laser-like focus on empirical data points and his patience for the long-term revelation of successive crops of experiemental vines, there is promise for something exceptional from this new, high elevation part of Virginia.