Cabernet franc is making a comeback in fine Virginia red wines as a varietal. In 2015 and 2016, I was disappointed in the few varietal cabernet francs that made it to the final round of the Virginia Governor’s Cup competition. There wasn’t strong varietal or regional consistency, and quite a few seemed tired and over-the-hill.

Two major exceptions both made the Governor’s Case–the top twelve scoring wines in the competition–which were both from Keswick Vineyards: the 2013 cabernet franc signature series, and the 2014 cabernet franc reserve. The latter wine won the 2016 Governor’s Cup.

This year, although the Cup winner was a cabernet sauvignon, I found the quality of the cabernet franc entries in the final round much better, with a variety of warm/cool vintages, and solid varietal and regional character.

Aside from Keswick’s double cabernet franc gold medals last year, here are a list of some of my favorite and most consistent Virginia cabernet francs: from the Monticello AVA, Veritas Reserve, King Family, Barboursville, Glass House, and from Madison Co., DuCard. From Northern Virginia, Breaux’s “Lafayette” cabernet franc, Willowcroft, and Fabbioli 2013 reserve.

I had liked Pollak Vineyards‘ cabernet franc regular and reserve in the past, but it seemed that wine had been overshadowed by their petit verdot and meritage, and cabernet sauvignon reserve.

Across the board, the current Pollak wines (and upcoming spring releases) are as good as they have ever been, probably the best ever. The regular Pollak cabernet franc 2014 was named Cabernet Franc of the Year at the New York International Wine Competition, and I found it perfect in its form and style.

First, it was 100% varietal. On the nose, great integration of cherry fruit and French oak with hints of pencil lead, followed by black cherry and herbal hints on the palate, with a crisp finish. This kind of classic Virginia cabernet franc, looking more to the Loire Valley than Bordeaux, will make friends amongst pinot noir fans for whom less oak and tannin is “more” for the wine drinking experience. Just coming together now, will be best from September of this year. Two stars**. 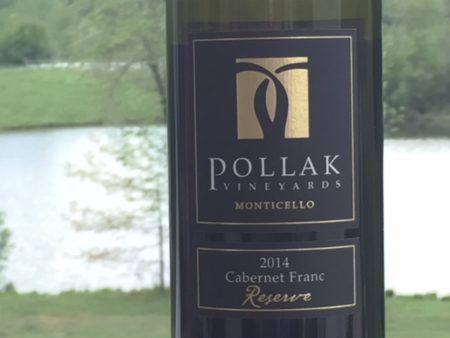 Nose: red and black cherry, hints of exotic spice and white pepper, subtle and draws you in like a fine
Chambolle-Musigny Burgundy, stylish but understated. On the palate, spicy and surprisingly concentrated red/black cherry flavors. The most impressive part is how the intensity of flavor grows, like the crescendo of an orchestra; intense but delicate, like fine Burgundy.

This fine wine isn’t cheap, nor should it be at $50. It’s the most expensive cabernet franc I’ve purchased, since the 2009 cabernet franc of Towse Vineyards in Ontario, but these were both worth it, and for the East Coast, is as close to top Burgundy as we can get by way of cabernet franc. If you spent $50 on Burgundy, you might not get as good of a wine as this. Get it while it lasts and then wait a year and a half if  you can.