Fine Virginia Wine in Keg, and Orange Rkatsiteli, both from the Monticello AVA

Wine as we know it is going through a transformation, in packaging as much as in content. Due to the weight, carbon footprint and transportation costs, many wineries are investing in alternative packaging, from PET plastic to Tetrapak to aluminum cans. Another option is wine in aluminum kegs. The Gotham Project is a greater New York area winery that only offers wines in keg to bars and restaurants. Gotham Project explains the advantages on its website: the keg system eliminates wine waste through oxidation and spoilage, over the keg’s lifetime it eliminates the use of 3,000 bottles, closures/foils, and labels, and there’s no having to cart out piles of empty bottles to the trash or recycle bins. And of course, no corked bottles. 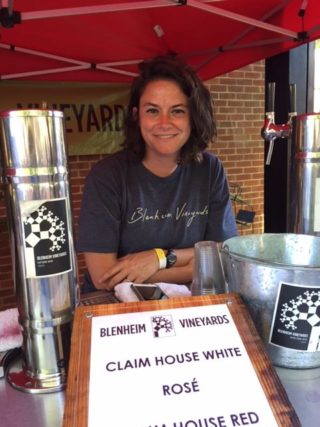 Kirsty Harmon, winemaker at Blenheim Vineyards south of Charlottesville (owned by local rocker Dave Matthews) has three wines offered in keg form, with the “Claim House” label: a white, red and rose. She says 1,500 cases are produced and sold in keg form (I had a chance to talk with her about it while sampling these wines at Fridays After Five at the Charlottesville Pavilion).

The white is about 75% chardonnay, 15% viognier with a small amount of blanc de pinot noir. The nose was fruity and floral, but not heavy, and there was a broad smoothness on the mid-palate that kept the wine from being too tart although it was dry, and versatile.

The rosé was a 50/50 merlot, pinot noir blend that gave nice red cherry notes, but again was broad and smooth on the palate, without the edges you often get in young dry rosé.

The red was about 70% cabernet franc, with small amounts of the other red Bordeaux varieties. This is a juicy but elegant summertime red that is dry but not tannic and very versatile, slightly chilled by itself or with food.

Skeptics might dismiss wines not in glass bottles, but Harmon points out that these are also bottled and sold at the winery. All these keg wines are elegant and balanced, which was not a surprise to me, showing the same house style Harmon applies to her other wines.

Wine of the Week: Stinson Wildcat 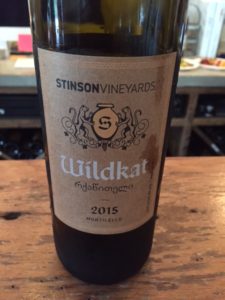 Stinson Vineyards in White Hall has released their first “orange” wine (white wine fermented on the skins), from the Georgian variety Rkatsiteli, a high acid grape which has developed much more character in aromas and mouth feel from this process of fermenting on the skins, which give much more color, aromas and flavor compounds but which reduce acidity.

The nose reminded me of nothing as much as a mead, with a riot of white flowers and boxwood that was almost breathtaking, and a far cry from what normal rkatsiteli would be. On the palate though I was a little disappointed, for although there were interesting flavors, with a broad rich texture, the acidity was kind of low which left the whole wine disjointed between the high tension of the aromas and the low notes on the palate. I’m informed that the 2016 version of this wine will be a fairly even blend of rkatsiteli and petit manseng, which tends to retain acidity even when made as a “vin jaune”. If you’re at the winery at their “Tailgate Thursdays” this summer, it’s worth getting a taste, and maybe even a glass; a very original and distinctive wine.

From the Waipara district, about 1/3 down on the East Coast of the South Island for you appellation geeks.

“Didn’t he make a typo on the vintage,” you may be asking. No. I just opened this glorious New World riesling and the Stelvin (screw cap) kept it well-preserved for a decade. This wine is a compelling argument for considering NZ riesling as world-class, as well as for laying down Stelvin-finished rieslings from any cool-climate region for a decade or more.

I recommend decanting Stelvin-finished rieslings of a decade or more of age. Once the stuffiness blew off, there was lots of lemon/lime on wet slate, with red apple behind. On the palate, ripe red apple, peach, with some passion fruit, and a broad lusciousness, but with a clean, fresh dry finish. This wine clocked in at 14% alcohol, but did not show any “heat” or coarseness on the palate. A brilliant example of what cool climate riesling can do when finished with a Stelvin screw cap and well-cellared.

Pegasus Bay is a rare winery, keeping vintage notes on everything they’ve bottled back to 1999! Here’s what they say about the 2007 riesling:

“The aromas and flavours invoke impressions of ripe stone fruits, such as nectarines and peaches, supported by hints of tropical spices, passionfruit and lycees. There is a backbone of tangy lime- and lemon-like citrus fruits which add a zesty “nervosity”. It has a spine of minerality and crisp acidity which keep it tight-knit and focussed, drying out its lingering after-taste.“

I met winemaker Matthew Donaldson in 2010 at the Riesling Rendezvous in Washington State. After a tasting and vinous encounter, he generously gave me a bottle of his 2007 riesling, which I kept until now. I think riesling is a lot like me, a late bloomer, but a long distance runner leaving a lot of the pretty flashy wines in the dust down the stretch. This wine is a great example, and I hope it inspires any reader who is planning to visit NZ to be sure to save space in their luggage for some of these wines, especially the riesling lovers who can stand to put one down for a decade and be confident it will be worth the reward. Hats off, Matthew; great job. This is on a level of what they do in Eden Valley and Clare over in Aussie land, but also with what they do in Columbia Valley, Washington. Keep up the good work. The Donaldson Family of Pegasus Bay, Wairapa, NZ (winemaker Matthew has the hair and goatee, second from right).