2017 Drink Outside the Grape Competition Winners

Charlottesville, VA–The second annual “Drink Outside the Grape” competition with 145 entries, a 45% increase over the first year, took place in Charlottesville, VA on August 9, resulting in 95 medals for fruit wines, meads, ciders and fruit brandies.

Drink Outside the Grape is a truly international competition, with entries from 15 U.S. states, ranging from Alaska and the Pacific Northwest to Florida and New Hampshire; seven provinces of Canada, Estonia and India. 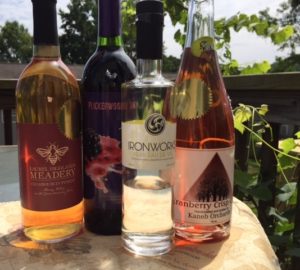 Best of Category winners, 2017 Drink Outside the Grape Competition

For cider, Castle Hill Cidery’s Levity and Serendipity, both Silver.

Montezuma Winery/Marsh Distillery in Seneca Falls, NY won the most medals in the competition with seven.

“Beverages in these categories are often misunderstood or not given the same respect as is given to traditional table wines,” explains Richard Leahy, Competition Chair and Conference Manager of the Eastern Winery Exposition. “Drink Outside the Grape gives fruit wine, mead, cider and fruit brandies a place where they can be judged fairly without being compared to traditional grape-based table wines. The growth in entries since last year shows that producers of these beverages want to get the word out about the good products they’re making.”

The competition was judged by industry professionals from a variety of specialties and wine and beverage writers. Two judges have authored books on fruit wine production and one has patented a dozen briar fruit varieties through the University of Western Maryland.

Complete medal results and judge biographies are available at www.drinkoutsidethegrape.com.