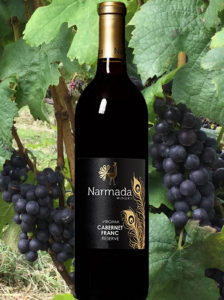 Narmada Winery Cabernet Franc Reserve 2013 was also awarded the Best of Category – Cabernet Franc, and a Gold Medal. “We are delighted to be among the 38 Gold Medal Winners from Virginia,” says Narmada’s owner and winemaker Sudha Patil. “Receiving the Best of Show is quite an honor among such a prestigious array of distinguished wines.”

“Our Cabernet Franc Reserve has long been a favorite of our wine club members,” Sudha says. The wine is generally marketed as a wine club exclusive, but through the end of September will be available to the general public. Narmada Winery Cabernet Franc Reserve 2013 retails at $34 a bottle, and is available at the Amissville winery or through its website at http://narmadawinery.orderport.net/wines/Wine.

Founded in 2009, Narmada Winery is located in Rappahannock County, VA, one hour west of Washington, DC. Shenandoah National Park and Luray Caverns are nearby attractions.