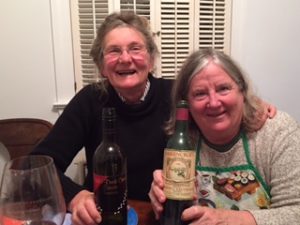 Thursday 12/14 I enjoyed dinner in Charlottesville with consulting viticulturist Lucie Morton, and a colleague of hers from Australia, Helen Waite.

After enjoying some introductory tastes, I was asked to fetch a bottle from Lucie’s wine cellar. I couldn’t find it, but was struck with the sight of a 34 year old Virginia cabernet sauvignon–a virtual wine fossil–from now-defunct Oakencroft Vineyards west of Charlottesville (Lucie had consulted for them), vintage 1983. Lucie owns a Coravin, which pierces a cork with a surgical needle, drawing out a portion of the wine, replacing the head space with pressurized inert gas. She decided instead of opening the whole bottle, to draw out a sample.  We were impressed with the healthy depth of mature garnet color. On the nose, it was definitely cabernet sauvignon, nice cassis fruit and a bit of herbal leafiness (but not green pepper), along with some sweet but integrated American oak. On the palate, it was clean, lively, with fruit, tannins and oak in good balance, and no weedy “twang” or hard green edginess.

We were all surprised and impressed, not only with the ability of Virginia reds to age well, but especially since canopy management of grapevines in Virginia in the early 1980s was primitive as a rule (Lucie’s clients fared better with her professional viticulture advice).

Helen had brought a cult Australian wine with her from Down Under; she had presented last week at a wine symposium on plant material, in which she has a doctorate.  This cult wine is called Duck Muck, as it is made from shiraz pressings, is inky dark, and 16.5% alcohol. As Eric Idle said in his satire of Australian wine on a Monty Python sketch, “Eight bottles of this, and you’re _really_ finished!” The appellation for this wine is Heathcote, in central Victoria, and the only other Heathcote shiraz I’ve tasted was outstanding in it’s northern Rhone style (and was criticized by an Australian restaurateur as being “a thinking man’s wine.”) The god of wine (aka Robert Parker) had given the 2007 vintage a 95 point rating, and a quick check of the secondary online market saw prices as high as $495.00 for one bottle!  Lucie asked if Helen would be willing to open the wine to share with me, and she said “He seems a nice enough bloke, and he was born in Australia [Melbourne], so let’s do it.” Whew! Finished with a screw cap, the wine was inky black, full of pure shiraz aromas and flavors of roasted black plums, spice and hints of bacon. The thing I remember most was the texture: plush as velvet an inch thick, with flavor, tannins and fuit finely woven together. Alcohol was high, but didn’t feel like it. Now This is a wine for a cold winter’s night! After ten years, it seems mature but not aged, and wonderfully rich and integrated. I should drink one of these at least once a year (if I can afford it). 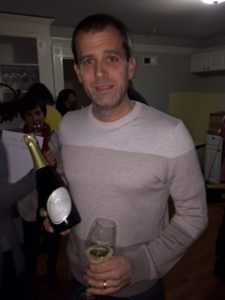 Owned and operated by the Vrooman family, the winemaker is Nathan Vrooman, and the vineyard manager is Christine Vrooman (she farms biodynamically). Lucie Morton is the viticulture consultant. The 2014 Ankida Ridge pinot noir which I featured in my Thanksgiving wine recommendations from last month, had just run out, and to replace it was the 2015 vintage (wine blogger James Melendez chose the 2014 vintage as one of his top 100 wines of 2017).

The 2015 vintage sparkling blanc de blancs (chardonnay) from estate grown fruit is an elegant, dry but smooth sparkler, with aromas of lemon curd, dry and refreshing on the palate but at the same time, uncommonly round and smooth. As I suspected, it was fermented in neutral French oak barrels, which blunts the sharp edge of acidity and mellows the wine a bit. It was aged for 18 months on the lees before being disgorged (the very day I tasted it). Not as bubbly as some tank-fermented wines, this was still bright and dry but smooth. Very promising for a new (third) Ankida Ridge product.

The 2015 pinot noir had a translucent garnet color so I knew they hadn’t added any coloring agents as is often the case on the West Coast with pinot. At first, the nose was tight and closed; after 20 minutes or so, it opened up, and I picked up the typical Ankida Ridge hallmarks of clean forest floor and dried red cherries. These were magnified on the palate, with characteristic bright red cherry and firm acidity. A promising debut for what has become a classic for Virginia reds.