Steven Spurrier, celebrating the upcoming publishing of his memoirs, “My Life in Wine”, in collaboration with the newly-formed Wine and Spirits Academy of Virginia, presided at a wine dinner at Veritas Vineyards in Afton, VA on Jan.31st which featured a dazzling menu of eight elegant courses matched with wines selected to illustrate highlights from Mr. Spurrier’s career in wine. 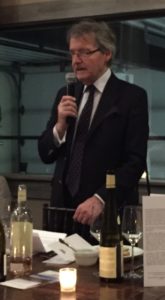 Spurrier has had an extraordinary career in wine; he was named Decanter magazine’s “Man of the Year” in 2017.” It began when he opened the L’Academie du Vin in Paris in 1973, France’s first independent wine school. He also opened a wine retail store there, and came to international prominence when he staged a blind tasting which became known as the “Judgement of Paris”, which featured top cabernet sauvignon-based wines and chardonnays from France competing against those of California…and in both classes, California wines out-scored the French. This created overnight credibility for California wines, and the event was made into a movie, “Bottle Shock.”

In 2012, Mr. Spurrier spoke at the Virginia Wine Summit trade conference, where he famously said “My favorite North American wine region is Virginia, because it makes wines I like to have a second glass of.” Mr. Spurrier and his wife Bella also grow the three classic Champagne grapes in Dorset, England, used to make a fine English sparkling wine, “Bride Valley.”

The Bride Valley rose sparkling wine began the evening; not too pale, it had lots of strawberry aromas and flavors and a creamy mid-palate from the pinot meunier. (Note: for the sake of respect, I won’t write any stars besides the wines since anything served here is topnotch, but read my notes and make your own conclusions.)

Everything on the menu and the matching wines was exquisite, and the winery had about 100 guests, enjoying themselves in a grand fashion. 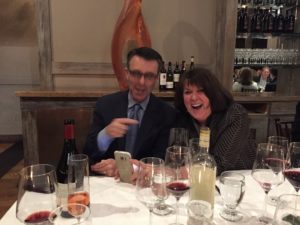 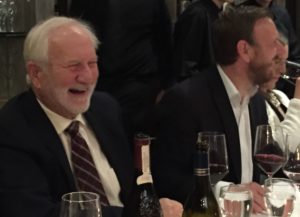 Dennis Vrooman of Ankida Ridge and Matthieu Finot of King Family experiencing what Mr. Spurrier described as “The conviviality of wine.”

After the Bride Valley rose came the first white wine course: Domaine Weinbach Riesling Grand Cru Schlossberg, 2016. “When the Grand Cru classifications were drawn up for Alsace, the Schlossberg vineyard was the one that everyone agreed should be a Grand Cru,” said Steven. It was light yet racy and brilliant on the nose, with lemon citrus notes and flinty mineral notes. On the palate, elegant ripe apple and white peach notes, with bright citrus and taut acidity dancing on the palate. As Mr. Spurrier pointed out, “This wine will last ten to thirty years.” . Paired with  Pho braised duck breast with pickled diakon salad and hoisin.

Wine Course Two: Domaine Bonneau du Martray, Corton-Charlemagne, Cotes de Beaune 2014. Regardless of anything else, it’s always a thrill to have the privilege of tasting a Corton-Charlemagne. This is without a doubt the most layered, complex and magnificent white wine I’ve tasted, but that’s really no surprise. Like the Schlossberg riesling, it starts on the nose with flinty, citrus minerality, then with some lemony lees and a hint of cream and butterscotch but with the citrus minerality dominant. On the palate – WOW! Linear acidity like a race car zooms across your tongue, brilliant acidity with smoky shale flavors; it’s all about the minerality. On the finish, it’s lonnnnng, and on the palate the volume keeps growing. Magnificent. Paired with a white fish roulade with foi gras, persillade, and caramelized onion. 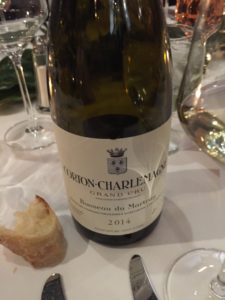 White Wine Course Three: Domaine de Chevalier Blanc, Pessac-Leognan 2014. This region used to be classified as “Graves” which has since been sub-divided and this is in the region that also contains the only First Growth red wine outside the Medoc, Chateau Haut-Brion. The nose is flinty, subtle and elegant, with hints of vanilla, wax bean and quince. On the palate, round but with large volume, lots of lemon/citrus with a hint of viscocity but light and lemony. Tight and very lean, hard to enjoy solo but then becomes a perfect match for the food: house-made tortellini with lemon fennel sausage crumble, fennel chow chow, and heirloom bruschetta EVOO. 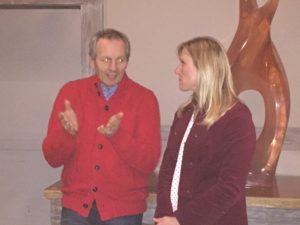 Wine Course Five: Domaine Chanson Beaune Clos de Feves Monopole Premier Cru 2010. Mr. Spurrier points out this is among the oldest wine families in Burgundy, and although it is now a Premier Cru, they are applying to become classified as a Grand Cru. The color is impressively dark for a Cotes de Beaune. The nose is elegant and lean. Palate: tough, taut, tannic and vibrant. Very promising but still too young even at seven years. Served with Rabbit Rilletes, bone marrow brioche, pickled shallot, stone fruit jam. 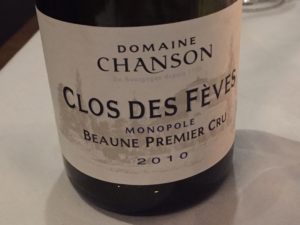 Wine Course Six: Chateau Langoa-Barton St. Julien, 2005.
This is a “Third Growth” in the Classification of Bordeaux Chateaux of 1855. A great year, and the color is dark! On the nose, loads of ripe cassis and cedar with tobacco hints. On the palate, light, lively with crunchy black fruits and a zesty fresh finish. Brilliantly poised. One of only three chateaux in the Medoc in the same families since 1830. Served with 30-day dry aged strip steak, yukon gold potatoes, raw milk duxelles, herbed butter.

Wine Course Seven: Chateau de Beaucastel, Chateauneuf du Pape 2007. For me, this was the star of the red wines, as the Corton Charlemagne was for the whites. Color: dark and brooding (made with a majority of mourvedre and all other 13 varieties approved for the appellation). Nose: amazing clean earth and fresh meat aromas. Palate: tastes like the essence of Chateauneuf du Pape; warm, deep, rich but then lively, fresh and vibrant on the palate. Brilliant, balanced, elegant and racy. What a balance of opposites! It reminded me of a Chopin Etude going from major to minor. Mr. Spurrier says he first went to the chateau in 1972 because he was buying their wines for his Paris shop and wanted to meet the proprietors, and they opened some older vintages back to 1919! Served with 12-month manchego cheese, carrot jam and dried fruit.

I realized that, apart from marking relationships with wineries he particularly liked and had relationships with, the common denominator with all the wines served at this glorious dinner reminded me of pieces of classical music; they all had tension, nerviness, with balance between a fresh lively acidity and ripe yet elegant fruit which danced together with the acidity, from a waltz to a tango to a foxtrot. Poise, balance and artfulness. Many thanks to Steven Spurrier, the Hodsons and their executive chef at Veritas, and Christopher Parker of the Wine and Spirits Academy of Virginia for making this marvelous evening possible.

Between courses six and seven, when spontaneous conversation broke out across the room for ten minutes or so, Mr. Spurrier noted that we had all “experienced the conviviality of wine.” At the end of the dinner, he was given a standing ovation, and the guests left with the convHe is hoping the American edition of his upcoming book “My Life in Wine” will be published by Knopf this fall. More information about the Wine & Spirits Academy of Virginia can be found at http://www.thevirginiawineacademy.com