2/27/18, Richmond, VA–Virginia Governor Ralph Northam tonight announced that from a field of 99 gold medal wines, King Family Vineyards of Crozet had won the Governor’s Cup for their 2014 Meritage, made by winemaker Matthieu Finot, who has been consistently producing one of the top Meritage wines in the state for many years. 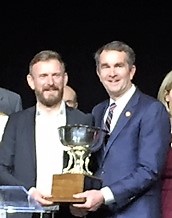 with the 2018 Virginia Governor’s Cup.

The KFV 2014 Meritage is a blend of 50% merlot, 23% petit verdot, 21% cabernet franc, and 6% malbec. [official] Tasting Notes: A complex nose of bright red fruit, violets, and dried rose petals is laced with delicate notes of saffron, vanilla and spice. The palate is bright and youthful, with a focused structure and layered flavors of cherry and raspberry alongside oak spice and tar. The tannic structure and acidity follow through the finish. Aged for 18 months in French oak.

King Family Vineyards won a total of five gold medals in the Governor’s Cup; aside from the Cup-winning Meritage, these include:

In 2010 King Family Vineyards also won the Governor’s Cup for their Meritage, from 2007. 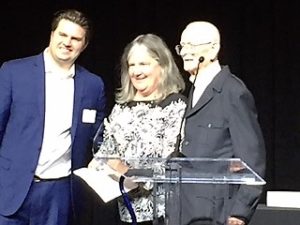 The Wine Person of the Year was awarded (posthumously) to Frank Britt, publisher of the original Virginia Wine Lover magazine, and the Gordon Murchie Lifetime Achievement Award was awarded to Lucie Morton, viticulturist and consultant. “Home is where the heart is,” she said in her acceptance speech. “In wine regions, it’s where people have planted vines.”