The 2018 Eastern Winery Exposition, the largest trade show and conference for the production wine and grape industries east of the Pacific states, set a new registration record during its three-day event from March 6-8 at over 1,000 attendees, even with some cancellations due to bad weather. With media, speakers and exhibitors from nearly 200 companies, total show participation came to 1,369. EWE’s motto is “providing everything an eastern vineyard or winery could want.” 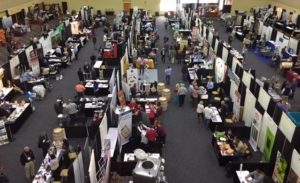 The 2018 Eastern Winery Exposition filled the hall with 193 exhibitors

In addition to setting a new attendance record, EWE also sold out its trade show to exhibitors three months early, another record.

“Even with the weather not cooperating, the 2018 Eastern Winery Exposition may have been the best received by speakers, attendees and exhibitors.  I look forward to continuing to providing a vital meeting place for the eastern industry,” says Show Manager Bob Mignarri.

“I strive to keep the conference program fresh and relevant with top industry speakers,” says EWE Conference Manager Richard Leahy. “For the first time in seven years, we had sessions that sold out of available seats weeks in advance of the show,” such as High-End Red Bordeaux Blends, Dry Rosέ and Re-thinking Cabernet Franc, says Leahy. “I had many attendees including speakers compliment me on the quality of the program and speakers.” 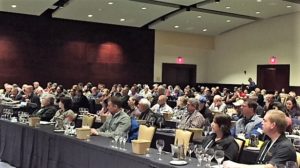 A record 200 attendees in the seminar “High-End Red Bordeaux-Style Wines”,

The Lifetime Achievement Award for 2018 went to Ms. Ellie Butz, a Product Specialist in yeasts and related products for Lallemand. Ms. Butz was the treasurer for the American Society of Enology and Viticulture, Eastern Section, for many years, and began her work with the wine industry in 1979 as a microbiologist employed by Tri Bio Labs to produce the first American freeze dried malolactic bacterial culture, LeucoStart. She recently retired from Purdue University after 15 years as Enology Specialist for the Indiana Wine Industry.

The primary sponsor of the Eastern Winery Exposition is Wines & Vines, a North American grape and wine trade magazine. The EWE conference is sponsored by i3 Vertical Point of Sale.

The 2019 Eastern Winery Exposition will take place March 19-21st at the Oncenter in Syracuse, NY. For information, visit www.easternwineryexposition.com.