On July 9th, winemakers, winery owners, media, and founders of the modern Virginia wine industry came to Horton Vineyards west of Gordonsville on Rt. 33 to celebrate his life and the immense impact of his research results on the Virginia and, indeed, eastern North American wine industry. 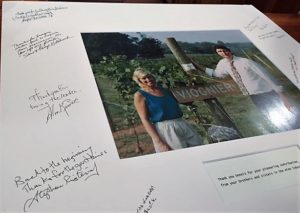 At a Virginia wine industry celebration of the life and work of Dennis Horton at his eponymous winery on July 9th, attendees signed a photo of he and his wife Sharon in tribute.

While he re-introduced the native Virginia hybrid norton to the state, Horton was internationally known for his work with Rhone varieties, and was the first to plant the esoteric Rhone grape Viognier commercially in Virginia. He also introduced a quadrilateral training system with a horizontally divided “lyre” canopy to increase yields, making viognier commercially viable (its uneven yields had led to its virtual extinction in France). His 1993 vintage of Viognier was the most awarded in the U.S. at the time, and Viognier went on to become Virginia’s official white grape, helping make an international reputation for the grape in Virginia.

Horton was also the first to release varietal Cabernet Franc, Tannat and Petit Manseng, in addition to Rkatsiteli, Malbec, Roussanne and Marsanne, and many others, but the introduction of just four (Norton, Viognier, Cabernet Franc, Tannat and Petit Manseng) revolutionized the quality of the Virginia wine industry, and he was given a Lifetime Achievement Award by the Virginia Wineries Association in 2011 for his pioneering work.

Horton was from Missouri, and had that state’s “Show me” attitude towards viticulture. When asked by this writer why he thought he had won the Lifetime Achievement award, he said “I think if I have any claim to fame in Virginia wine, it’s because I’ve probably ripped up as many vines as I’ve planted here because they didn’t work. In Napa, they have three-tenths of an inch of rainfall during harvest; we call that a dew. We get consistent rains at harvest and need grapes that don’t mind an inch of rain.” He pointed out that Cabernet Sauvignon would lose sugar and acid during late season rains in his vineyard.

Gordon Murchie did much work organizing the Virginia wine industry and helped create the Congressional Wine Caucus to advocate for wine-friendly federal legislation (an annual Lifetime Achievement Award is given by the Virginia Wineries Association in his name). He described Horton as “the epitome of the old American West. He had great independence and was a true entrepreneur who wasn’t afraid to tackle the status quo, by introducing new grape varieties that changed the course of the Virginia wine industry. He was also a hell of a nice guy.”

Neal Glaser, Horton Vineyards’ long-time marketing director, reveals that few people know that in the beginning, Dennis Horton was as ready to open a micro-brewery as a winery. “The tax incentives provided in the Virginia Farm Winery Act made it much more advantageous to start a farm winery in 1989 than a brewery,” he explains, showing what a difference favorable state support can make to its local wine industry.

The Horton Vineyards tasting room was full of Virginia wine industry members on July 9th who came to share their condolences with his family and give tribute to his contributions to the industry.

Long-time Virginia winemaker Andy Reagan was recently hired as the new winemaker at Horton Vineyards. He reminisced, “I met Dennis in 2000 as a young altruistic winemaking novice. Back then as a fledgling industry, there was a quest to find the best and or most suitable varieties for Virginia. Dennis was at the forefront of that quest, with a no holds barred attitude and determination. He set the tone and took the risk on a grand scale for so many of us to learn from.”

Horton’s wife Sharon was the operation’s vineyard manager, and Reagan acknowledged them both for “bringing a work ethic and passion that hadn’t been seen or realized in Virginia yet.” He explained that “There are a few ‘family trees’ in the Virginia wine industry, those of us who have been influenced by the longer tenured winegrowers. I for one, am happy to say I am part of the Dennis Horton, tree…via Jenni McCloud, Alan Kinne, and Brad McCarthy. Dennis was a great influence on my life and career, and I am not sure he knew so. And I think that is a beautiful thing, that your life’s work, and persona exceeds direct boundaries and continues to affect people past six degrees of separation. That is relevance, and Dennis was and always will be extremely relevant.”

Winemaking Consultant Tom Payette began work in the Virginia wine industry shortly before Horton Vineyards opened in 1989. “Wow…where would our Virginia Wine Industry be without the influence of Dennis Horton,” he asked. He explained that Horton “would research a grape and, for “an experiment”, he would plant five acres or at least three.  He also experimented deeply with trellis systems, bringing a larger understanding of what works in viticulture on the East Coast. The whole East Coast owes huge amounts of gratitude to the trail blazed by Dennis Horton with Sharon [the vineyard manager] by his side quietly, patiently, hardworking and knowingly smiling all along the way.”