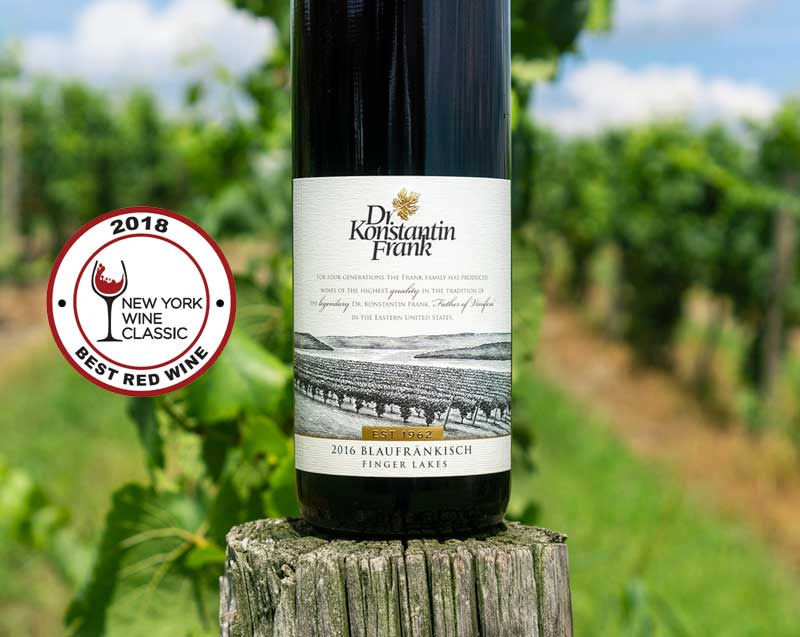 Winery President Fred Frank said, “We’re very excited to receive the Winery of the Year award from the New York Wine Classic. We feel it’s a testament to the team here at Dr. Konstantin Frank and the great range of quality wines we produce. It’s a wonderful honor!”

Fourth generation and General Manager Meaghan Frank elaborated, “Our founder, Dr. Konstantin Frank constantly said, ‘Americans deserve only excellent.’ For 56 years we have expanded upon Konstantin’s legacy with an incredible group who has worked tirelessly to produce the best quality wine from our old vine vineyards. My father Fred and I are delighted about this achievement and are so proud of our talented and hardworking team.”

This writer named the 2016 Dr. Frank Blaufrankisch of of his tasting highlights, and the top red, of his recent tasting of Dr. Frank Wines two months ago, in his recent blog post on the wines of Keuka Lake: ” Dr. Frank *Blaufränkisch 2016:  Vibrant ruby hue. Nose: black raspberry and boysenberry with a hint of pepper. Palate: ripe spicy plum and vivid red berries, lively acidity but fruit-driven, great fruit/acid balance, just a hint of oak in the background. A great way to showcase a Finger Lakes style for this Austrian grape. $22″ (Note: * rating = “very good.”