President Laury Ward of Finger Lakes Wine Country said “This honorable award and reader recognition is a testament to our local community of farmers, winemakers and hospitality ambassadors, as well as to the many visitors who, through word of mouth, have discovered and fallen in love with our stunning destination.”

Ranging roughly from south of Rochester in the west to southwest of Syracuse in the east, the Finger Lakes is one of the most affordable and beautiful wine country destinations in North America with three wine trails, more than 100 wineries, over 200 accommodations, and a wealth of things to see and do. Cycling and sailing are becoming increasingly popular due to the long and (mostly) flat north-south running roads on either side of the lakes, and the increasing number of wineries who now serve country award this year. 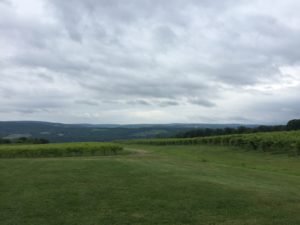 Lakewood Vineyards (recently visited and reviewed in June) recently won the New York Agricultural and Environmental Management award for 2018, from the NYS Dept. of Agriculture and Markets. Per reporting in the October issue of Wine & Craft Beverage News), Lakewood farm manager and grape grower Dave Stamp, said “We’re very happy to receive this award. I’m just carrying on what was instilled in me growing up. We’ve got to take care of the land to reap its rewards.” He noted that he had worked with the NYS Soil and Water agency over the years to implement recommended projects, praising their current team as “among the best. We always seek their advice because it’s good advice.”

Some of the recommendations Lakewood has implemented include cover cropping with fast-germinating rye and mulching hay, to reduce erosion and run-off into Seneca Lake and also to retain moisture and nutrients in the soil.

Lakewood Vineyards was one of the first to compost grape with horse manure for fertilizer and fix organic matter in the soil. Since 1951, the farm has grown from 52 acres to 85 acres while cutting pesticide use nearly in half. Crushing their first harvest in 1988, the Stamp family now has the third generation working in the winery and currently produces 100,000 gallons of wine.

Hermann J. Wiemer Vineyard has been selected as one of the Wine & Spirits Magazine Top 100 Wineries of 2018. This is the 9th time in the last 10 years that we have received this honor. Wine & Spirits Editor Patrick Comiskey writes of Wiemer, “Hermann J. Wiemer not only took Top 100 honors this year: Fred Merwarth’s 2016s pretty much crushed the new tasting table in our Los Angeles offices… When it comes to Riesling, there is simply no one better in the United States.”

Wiemer will be joining the other Top 100 wineries to pour at the 15th Annual Top 100 tasting event on Tuesday, October 9th in San Francisco.  “We are happy to be in such great company and to be representing New York State and the Finger Lakes Region!” says Wiemer co-owner, Oskar Bynke.