Located in Edinburg, between Winchester and Harrisonburg, on land that has been in Emma’s family since the mid-1800s, Jim and Emma planted their ﬁrst 5000 vines in 1976 and have won numerous awards ever since. 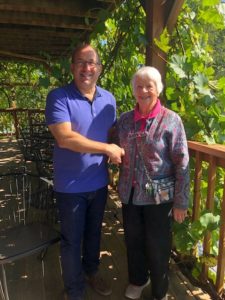 Michael’s relationship with former owner and founder Emma Randel began in 2010 when Emma hired Michael as a winemaking consultant. Michael believes the Shenandoah Valley has some of the state’s best grape growing potential and has thus far been under the radar.  “Shenandoah is the driest county in Virginia and one of the driest East of the Mississippi river with ideal soil composition and optimal elevation” notes Michael.  He is excited about the viticultural potential and the opportunity to revitalize the vineyards with varieties that grow especially well in the valley—adding Alsatian varietals like pinot gris and pinot blanc, to the existing old vine Riesling.

Located two miles off Interstate 81 at exit 179, Shenandoah Vineyards is ideally located for visitors.  The tasting room and winery are housed in a Civil War era barn on a bucolic farm setting.  The tasting room is currently open Wednesday-Sunday 10 am to 5 pm with plans to open daily in the new year.  TC Goble, the tasting room manager of over 15 years, will continue to offer visitors her warm hospitality while educating them on Michael’s winemaking philosophy.

Michael Shaps Wineworks is Virginia’s largest contract winemaking operation, producing wine for over ﬁfteen clients.  Michael also owns a winery in Burgundy, France (www.maisonshaps.com) and imports these wines to the United States, where they are sold throughout Virginia and in the two tasting rooms at Michael Shaps Wineworks near Charlottesville, VA.