At the annual technical meeting of the Virginia Vineyards Association meeting at the Omni in February, Karl Hampsch, proprietor of Loving Cup Winery in North Garden was named “Grower of the Year” for 2019. The award was presented by Bettina Ring, Virginia Secretary of Agriculture. Loving Cup is Virginia’s first certified organic vineyard which opened in 2014. 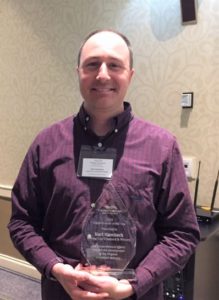 Ring noted that Hambsch had spent most of his life in Virginia, having graduated from James Madison University, and having worked at both Prince Michel and Veritas Vineyards. “His natural curiosity should be an inspiration to growers,” said Ring, noting that Hambsch credits both Chris Hill, viticultural consultant, and the Hodsons at Veritas for much of his success to date.

He explained that we’re now living in the “Anthropocene”, an era where the climate has been changed by human behavior. Global CO2 levels currently are over 400 parts per million, and that CO2 and other greenhouse gasses allow the earth’s atmosphere to hold higher levels of moisture, which also trap more heat.

Global temperatures have been steadily increasing for decades, but Ellis cautioned that it’s much easier based on the existing data and known trends for climate models to predict temperature changes than precipitation changes.

Broadly, he says that statistics show that in the Mid-Atlantic, we have seen increasing warming as well as increasing wetting in recent years. Models based on realistic fossil fuel emissions show that temperatures, which have increased about 2 degrees F since 1980, will increase another 2 degrees by the early 2040s.

Interestingly, summer warming has been increasing less since 1980 than warming in the other three seasons. Also, extreme cold days have decreased in winter. Good news in a very general way is that frost-free days in Virginia have increased by 10 days over a 90 year average.

For precipitation change, Ellis says that annual precipitation has increased 5.75 inches annually since 1980, now with all seasons except winter showing an increase of up to 2.28 inches each (winter has less).

Generally, the outlook for temperature change in Virginia is that we will likely continue to have fewer extremely hot or cold days and nights, and that by the 2040s the state’s average climate will warm another 2 degrees F.