What I Tasted on My Summer Vacation, part 2: European Colleagues on Keuka Lake (NY)

The roots of fine (vinifera) winegrowing in the Finger Lakes come from two Europeans, Dr. Konstantin Frank, a Ukrainian of German descent, and Charles Fournier, a French sparkling winemaker, who demonstrated that cool climate vinifera grapes would grow along the lakeshores of the Finger Lakes in the 1950s.

Recently, the European influence has been renewed by a new generation of immigrants. These include the native French husband-wife team of Céline and Sebastien LeSeurre at Domaine LeSeurre on Keuka Lake, Peter Weis of Weis Vineyards, originally from Germany, Johannes Reinhardt, also German-born and formerly winemaker at Anthony Road Vineyards and now owner/winegrower of Kemmeter Vineyards on west Seneca Lake, and Louis Barroul, a French native from the Gigondas region in the Rhone now making wine at Forge Cellars on southeast Seneca Lake. 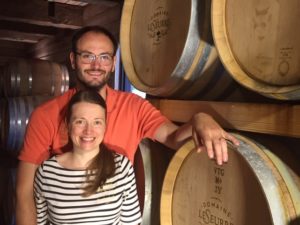 This young French couple who are passionate about making terroir-based wines in the Finger Lakes are both from winemaking families, Sebastien from the Champagne region, and Céline from the Pyrenees region. While they trained in France, he in viticulture and winemaking, she with degrees as a sommelier and in hospitality and tourism, they wanted to see the wider wine world (in fact, they met while they were both in New Zealand). Sebastien worked for nine vintages in Champagne, earned a Master’s degree in viticulture and enology, then apparently drank a whole lot of espresso and set off to visit 32 wine-producing countries in one year!

Sebastien worked one vintage in Saint-Émillion (Bordeaux), one in Languedoc-Roussillion (Maury), one in Marlborough (New Zealand), and one in Yarra Valley (Australia). He and Céline met in New Zealand in 2009 in the Clos Henri Vineyard, where they worked for almost two years. They continued travelling the wine world together, and ended up in Australia for the 2011 vintage, handcrafting wine for DeBortoli wines.

They came to New York when Céline became the US Brand Ambassador for M. Chapoutier, a well-known wine producer of the finest Rhône Valley appellations. Sebastien worked at various wineries in the state. “Eventually my desire to learn brought me to the Finger Lakes where I found myself quickly connecting with the terroirs and community,” he says. “In September 2011, feeling rich from our worldwide experience, we moved to and fell in love with the beautiful Finger Lakes region,” says Céline. “Our first vintage together as Domaine LeSeurre was in 2012, and in October 2013 we opened our tasting room on the east side of Keuka Lake.”

Their tasting room has a fine view of Keuka Lake with Bluff Point just behind some trees. When I asked Sebastien why he decided to locate here instead of anywhere else, he just gestured towards the view and said “Look.”

Like many European-trained winegrowers, Sebastien is energized by the freedom from AOC regulations that apply in most of the fine wine regions of Europe. There, if you don’t plant approved grape varieties, with approved rootstocks and specified yield limits per hectare, you could lose the right to put the local appellation on your label. 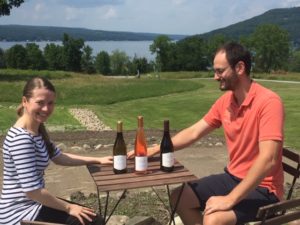 Sebastien and Celine outside their tasting room on east Keuka Lake, Bluff Point in the background.

He is also energized by the newness of making vinifera wines in the Finger Lakes. “In France, we decided which varieties to plant where hundreds of years ago; Dr. Frank’s winery opened less than 60 years ago. There is so much to discover and experiment with; we can do anything here,” he enthuses.

He “strongly believes Keuka Lake will be a good terroir” but he also has four different vineyard sources. He’s looking forward to experimenting with grape varieties and rootstocks.

We discussed “Old World” and “New World” winemaking philosophies. One of the main “Old World” influences on his thinking is having grown up in a winemaking family, and the collective wisdom that was passed down over the generations.

Like the other European winemakers I interviewed, he applies the Old World idea of respecting the terroir where he and his grapes are located. “I’m not trying to make Alsatian or German Riesling here; I’m making Finger Lakes Riesling.”

Dialing into terroir also includes searching for vineyard sites, and a European way of thinking about them is by the soil type, and how that expresses flavors and textures in the wine. In his three Rieslings, he blends shale soil vineyards with clay soil ones for complexity and style. In a typically French way, he also constantly described some delicious food choices as he took me through the tasting, mentioning ingredients and seasonings, and pointing out how the lees, barrel aging and soil type all interplay on the palate.

Another typical “Old World” approach is to focus on tasting the grapes, the must, and the wine even as it ferments, on a weekly basis, and then to trust his instincts rather than use scientific measuring instruments (this should only be tried by persons with advanced degrees in winemaking and viticulture!) Now, although instrumental precision is a big part of “New World” winemaking, a lot of American winemakers are moving towards “trusting their palates” instead of just going by the numbers. “Who wants to taste a wine that tastes like numbers?” asks Sebastien.

Aside from his blending of vineyard sites as with cooking ingredients, three more distinctive winemaking techniques Sebastien uses are aging Riesling in French oak, lees stirring in barrel as much as once a week for some wines, and aging all his reds for two years in French oak.

All these techniques are successful and contribute to a distinctive house style, with original and very elegant interpretations of vinifera grapes. “We work to make people happy,” says Sebastien of his family business with a smile. “Our wines create memories” with friends, families and fine meals. He and Céline intend to build up the winery to eventually pass it on as a legacy to their (now adorably cute) daughters Manon and Laurette.

All the wines at Domaine LeSeurre are on a consistently high plane of quality; these highlights show you the diversity of their fine wines.

* Dry Riesling 2016: Nose: tight, racy lime and mineral, then ripe apple. Palate: high acid but ripe, full-bodied, rich and powerful. Lees-stirring gives the wine some mid-palate weight and breadth; he does this for better synergy matching with food. Texture is fleshy but not flabby, with a fresh clean finish. A good food Riesling.

**Riesling “Terroir d’ Excellence 2017: Grapes all from one 1971-planted vineyard. Nose: bright smoky shale with a hint of brine; intriguing and terroir-driven. Palate: Wow: chewy but zesty lime/shale, smoke, round, flavors of green and yellow apple. Great finesse and integration, also fine match with food. The lees were stirred once per month. Can age but drinks well now.

***Late Harvest Riesling 2017: picked 12/20. Nose: loads of passion fruit and grapefruit. Palate: Wow! Such finesse and integration; fruit-driven passion fruit and apricot melts on the tongue, outstanding fruit/acid balance. Will age but yummy now; makes me think of things  that couldn’t be printed in detail. 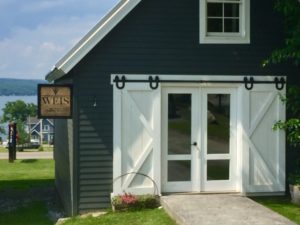 Literally next door to Domaine LeSeurre is Weis Vineyard founded by Peter Weis, a native of Zell in Germany’s Mosel Valley. He makes a similar range of vinifera wines as does Domaine LeSeurre but also works with hybrids and blends. The recent scores of Mark Squires (Wine Advocate) give him consistently high ratings from 89 to 94 points.

When I asked if his winemaking philosophy was “Old World”, he said interprets it as “working with nature. In general we are trying not to rush our wines and let them mature on the lees and the barrel aged wines giving them time, up to 24 month in barrel. It is important to me to get the grapes from sites with the stylistics we like to see.  For example, our Riesling need to come from vineyards sites where there is a high stone content and are more slate oriented just like I am use to from the Mosel River.”

Peter works with roughly 15-20 growers each season. I asked how his European training influences decisions like when to pick and if he sulfites? Like Sebastien, “We make the decision to pick based on taste profiles. This makes it difficult because there are so many sites and growers during harvest, but it is important to pick the grapes when they are at peak flavor for the determined style.”

Regarding native/wild fermentations, he typically inoculates with cultured yeasts, but is also utilizing more and more wild yeast. “For example, our current Dry Rosé was partial wild ferment to add more mid-palate character. Rosés can be to lean sometimes.” However, unlike Sebastien, “We don’t have much lees in our wines and tend to have a fresher more fruit-forward characteristic.”
Peter has introduced a new line of wines, the black label “Winzer Select Rieslings” in the style of the German predicate wine levels (“winzer” means “winegrower” in German).  “Now we have a Kabinett Auslese Ice Wine. This is our 2017 vintage and we just received 94 points for it from Robert Parker’s Wine Advocate.”
Like Sebastien, he makes stylish and full-flavored vinifera reds. On his style for reds, “I determine the fermentation and maceration of the grapes depending on the year and quality. In general I like to age red wines around two vintages in barrel so that they have more time to mature.”

Speaking of his friendly collaboration with Sebastien and other colleagues, he explains “We can contribute to the knowledge in the Finger Lakes by working with Interns and employees and teaching them new techniques from our European winemaking background. But we are also exchanging information with local [“New World”] winemakers as well.” 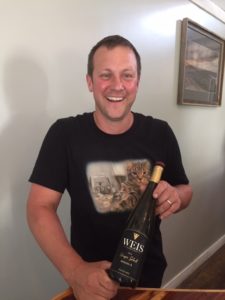 *Unoaked Cabernet Franc 2016: Peter says he could make an unoaked style in 2016 because the vintage was so good and the fruit so ripe. Nose: ripe gentle red and black fruits, with loads of baking spices. Palate: lovely Loire-style red and black fresh red cherry, nice crisp finish.