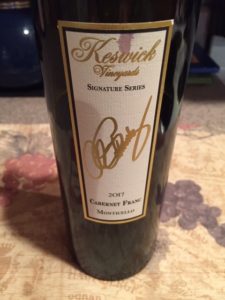 The 2017 was a top vintage for Virginia wine, and Keswick’s 2017 Signature Reserve Series Cabernet Franc (not yet released) is showing at least as well for me as did the 2013 and 2014 gold medal winners.

***(tasted decanted). Nose: deep ripe varietally true fruit, black cherries and exotic baking spices, then oak–hints of vanilla, almond and spice but in the background. Palate: mouth-filling but still has the fresh crisp finish typical of the variety on the finish. Young, but lots of finesse, excellent integration of ripe fruit, tannin, oak and drinks so elegantly for a “large” style red! For an as-yet unreleased reserve, tops.