When a very good or great vintage comes along, it’s a good idea to buy enough to lay down for when they really mature, as you enjoy the other bottles when they’re young. Any wine lover deserves to drink mature wines of a decade old or more, especially if they buy them on release and cellar them well (no warmer than 65 degrees, in the dark and lying horizontal). 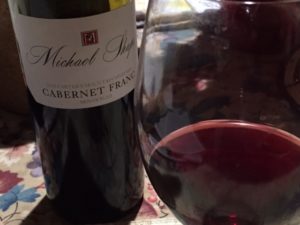 I still have about a mixed case of the great 2010 vintage in Virginia wine in my cellar. In recent years I’d opened bottles and realized they were still too young, so I bought up ’14, ’15 and ’16 vintages biding my time waiting on the ’10s. By the time I had about half a case of ’17 vintage wines so far, I resolved to start drinking the ’10 vintage again this winter.

Usually, Cabernet Franc matures in 2-3 years after the vintage, and peaks in 5-6 years at best. With only moderate tannins, it usually won’t hold past 7 years. In the 2010 vintage, which was hot and dry, great red wines were made across the East, from North Carolina to Ontario.

I opened the Michael Shaps Cabernet Franc 2010, Monticello AVA, on Dec. 7th, and was glad I’d waited this long. The wine was mature but still holding well, and demonstrated what can be done with high quality Cabernet Franc fruit in a great vintage.

The color was deep ruby going into garnet . The nose had dried red cherry and plum aromas with flinty pencil lead hints, together with baking spices. On the palate, the wine is full-bodied but beautifully balanced between ripe fruit, spicy oak and tannin/acid, and all is well-integrated, with a pleasing crisp finish typical of the varietal. Fans of Cabernet Franc and Virginia wine will find this a great example of what can be done with the varietal in a fine vintage.

For a varietal Cabernet Franc, it’s hard to beat this anywhere on the planet for nine years of age in a fine vintage. Michael Shaps also has a talent for using oak so that you notice it in his red wines, but still makes you admire how well he integrates it with fruit and acidity. Drink within the next year or two.