Out of a field of over 500 entries and 64 gold medal Virginia wines, 868 Estate Vineyards in Purcelville, Loudoun County, won the 2020 Virginia Governor’s Cup for their  2017 Vidal blanc passito, a dessert-style wine, awarded by Governor Ralph Northam, to 868 owner Carl DiManno at a tasting of gold medal wines at a ceremony in Richmond on Feb. 25th. 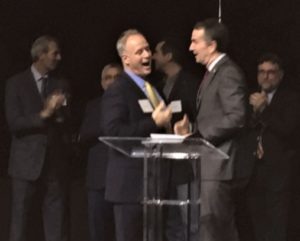 Made from 100% Vidal Blanc, the 2017 868 Vidal passito was harvested at 22.5 Brix and then dried for one month to concentrate flavors and by reducing water content, increase the sugars to 32 Brix. The juice was fermented to 8 Brix and then chilled to stop fermentation, and aged in neutral French oak for 14 months. The wine is vibrant and fresh, with brisk acidity (10.8 g/l)  to match the 8% residual sugar, and with a pleasing mid-palate density reminiscent of Sauternes.

These are the top twelve wines in the Governor’s Cup competition by highest average score given by the 13 judges of the final round  of top-scoring wines in the competition.