The 2008 was a cool vintage style, but that doesn’t mean the wine was light or wimpy, it just showed a more feminine, graceful style of PV than I normally see in the Monticello AVA, with floral and herbal notes and very smooth texture. 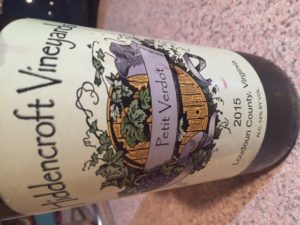 Although 2015 was a “C” vintage in the Monticello AVA due to Hurricane Joachin and another storm a week later which impacted Cabernet Franc and Merlot especially, Hiddencroft in northern Loudoun County had a different growing season. The alcohol is 14%, and at five years the wine is mature, but still gutsy and more masculine than the 2008. Stylistically, it reminds me of a Piedmontese red, like a blend of Barbera and Dolcetto with a touch of Nebbiolo.
Nose: Rich ripe blackberry, with pepper and smoke, and a touch of forest floor. Palate: lively but zesty, fruit-driven, with ripe blackberry flavors, amplified with flint and clean earth hints, a hint of truffle, deep black fruits and full but smooth tannins on the finish. Also, refreshingly fruit-driven with no oak flavors or texture. Classy. Good integration, can age another 4-5 years.

This is like a Virginia version of a high-end Zinfandel blend such as the Ridge Geyserville or St. Francis Old Vine (county blend) Zinfandel, each of which have significant quantities of more tannic grapes like Mourvedre (a k a Mataro) and Petit Sirah to balance the intense fruitiness and alcohol headiness of the Zinfandel. This wine shows that a very northern site in Virginia can make a Petit Verdot to stand with any other in the state.