“Un-Wine’d”, a Virgina Public Media/PBS show about Virginia food and wine, produced by Shari Pennington of VPM and hosted by Tassie Pippert of James Madison University, kicked off its third season on Friday, with an episode featuring this writer, Richard Leahy (author of Beyond Jefferson’s Vines: The Evolution of Quality Wine in Virginia, now in a third edition).

The episode mentioned his book, Thomas Jefferson, Virginia wine and some of the iconic foods that Jefferson introduced to America after his return from France, most famously French fries, macaroni and cheese, and ice cream. Ms. Pippert demonstrated how to cook or prepare each of these on the show, including with new twists, like adding white truffle oil and herbs to the French fries, and how to make gelato yourself (which has much less fat than ice cream).

Friday Jan. 22nd, a virtual “happy hour” was hosted by Tassie and Richard, where Tassie had invited everyone to prepare the white truffle fries and match with a Chardonnay, which really was a good match. The turnout was quite large, with about 50 in attendance, including half a dozen winemakers or winery owners such as Matthieu Finot from King Family, Scott Eliff and his wife Karen from DuCard Vineyards, Jane Rouse of Rockbridge Vineyards, Dave Drillock of 53rd Winery, and others.

Saturday at 1pm featured the third season’s first episode. Tassie interviewed this writer, who pointed out that Virginia has 400 years of documented wine history since Act Twelve of the Jamestown Assembly in 1619, where the governor mandated the planting of at least 10 European grapevines per head of household. We then moved to Jefferson and his tastes in wine and how he introduced light, fine table wine to Americans, having spent liberally on top French wines and having had them shipped to him, where he employed them as aids to political diplomacy as President.

Today, some 200 years after Jefferson’s retirement to Monticello, he would have been enormously proud to have learned that Steven Spurrier, a leading British wine writer, had declared in 2012 that his favorite North American wine region was Virginia. 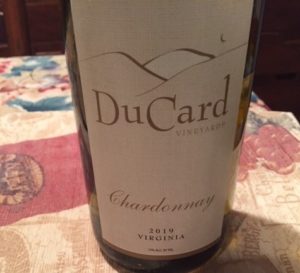 During this hour-long Zoom meeting on Friday, I found myself coming back repeatedly to the smooth, ripe but fresh DuCard Chardonnay from the newly released 2019 vintage. It was round and juicy on the palate, a bit viscous, no obvious buttery or oaky notes, plump mid-palate and a clean, full finish. It’s still young and needs a couple of months to develop but will be a real versatile quaffer as well as a match to something like roast chicken.

I also tried a fresh, floral DuCard Viognier, also from the new and ripe 2019 vintage. It had the classic fresh white flowers on the nose and broad viscosity on the palate. Also young like the Chardonnay, it needs until spring to develop fully.

Both wines are a little low in acidity, characteristic of the vintage, but they are clean, pure and fresh, which will make for forward, easy drinking by the time it’s white wine weather. 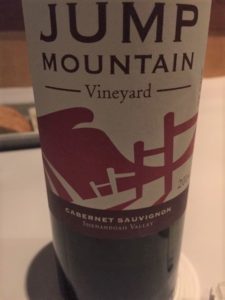 If you’ve never heard of Jump Mountain Vineyard, it’s about time you did. It’s in western Rockbridge County, near the picturesque mountain of that name. The soils are well-drained sandstone loam, and the mountain to the west blocks the winter winds to protect the site. In the summer, it’s a heat sink with a continental climate, so Cabernet Sauvignon can ripen well in a long and usually dry growing season (their signature white wine is Gruener Veltliner).

This mature but still evolving Cabernet Sauvignon shows that if you have the right site and soils in Virginia, you can make fine Cabernet. The 2014 vintage was a “classic” one, meaning not too hot, with cool nights for acid retention in the grapes, and not too wet, for slow but full ripening. The wine is very dark in the glass. Nose: black fruits, cedar and cigar box spice. Palate: still fresh, fruit and acid-driven, but with smooth, ripe tannins, a plump mid-palate, black currants, and that cigar box spice on the finish.

This wine could age more and still show well at 10 years. This could also stand up against Cabernets from any other part of the state, and might be preferred by European palates over the more intense, higher alcohol versions from the West Coast (this was 13.5%).