Judging the 2021 Virginia Governor’s Cup: What to Look For This Year

As I have done for the last decade, I was a judge in the annual Virginia wine Governor’s Cup competition this month, only there was a logistical proble: how to do the event with safe social distancing during the pandemic? Jay Youmans MW came up with what I thought was a brilliant (but challenging) solution: he delivered 2 oz. samples of each wine sealed in small glass vials, sorted by square cardboard boxes by flights (see photo). 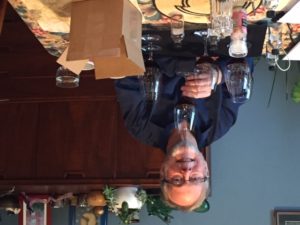 Richard judging wines for the Governor’s Cup at a safe social distance.

I thought the organization of this fairly complicated logistical endeavor was pretty well done. Each flight or logical grouping of wines was sent in an individually sealed cardboard box. Each box had a sheet describing the flight, and each wine was labeled with a number (no other identifying information besides varietal or style). It was easy to track each wine and its unique number.

I then poured each wine into a Riedel glass, tasted, made notes, and then typed the notes into an Excel file with the wine’s identifying number to send to Jay and his crew to tabulate. The wines with the twelve highest mathematical scores are put in the Governor’s Case (twelve bottles to a case), which are all gold medal winners, and which are then promoted on the virginiawine.org website as the top winners for the year. Within the Governor’s Case, the wine with the highest total score is declared the winner of the Governor’s Cup for that year. For past winners, see www.virginiawine.org/governors-cup/awards .

I was glad that Jay Youmans had thought deeply about how to make it possible for us judges to perform our duties, taste and record our scores, and send them electronically, all in complete isolation. This made it a challenge to do the duties traditionally done by the crew; clear and clean the glasses, pour a new flight, type and upload the scores, etc. It took a lot of work to replace the crew, and twice as much time to go through the wines as usual, making me appreciate the crew!

There were 25 flights of wine, averaging between 4-6 wines per flight, or about 125 wines, but this was only the final qualifying round of the best wines; there are usually 425 wines submitted each year in the Cup competition.

There was a Zoom call on the morning of the second day of the final round of the competition (it’s always broken into two days with 10-12 flights per day. Doug Zerbst of Republic National distributing said that he felt that the average level of wine quality in this final round was higher than we had tasted in the previous years. Judge Frank Morgan (judging the final round for the first time) agreed. “My overall impression of the wines tasted in the final round — wow, what a fantastic showing from Virginia winemakers across all flights. The improvement in quality across Virginia wine since I first judged one of the preliminary rounds back in 2012 [or, it may have been ’13] is impressive. I was particularly impressed with the red blends, Cab Franc and Petit Manseng flights.”

I found it both stressful and alienating that there were neither other judges nor crew in the room while I had to juggle several skill sets while remaining sober. Morgan agreed; “I missed the banter of being with the other judges but appreciate the lengths Jay and the Capital Wine School team went to ensure the competition was conducted in a responsible and safe manner. Jay, Kirstyn and team did an amazing job again this year!”

In previous Cup competitions, some wineries have complained that there weren’t many white wines that got top medals, but then it turned out that few whites had been submitted, due to most of them selling out before the Cup accpeted entries in January. This year, I was pleased to see that about 40% of the final round of entries were whites. I was particularly impressed with the Chardonnays, both light and oaked styles. It seemed that after years of being a voice crying in the wilderness, Virginia vintners had finally listened and had taken Burgundy for their model instead of the West Coast. Fruit and acidity were bright and fresh, and even in oaked and malolactic versions, the freshness stayed all the way through.

In the red wines, I was also impressed with the Cabernet Franc, Meritage and Petit Verdot classes. Even though Cabernet Franc has long been touted as the strong-suit vinifera (European) red varietal for Virginia, even in the final round, I’ve found a lot of quality variation in the past. This year, even though there were five vintages of Cabernet Franc in the final round, quality was more evenly high than has been the case in the past; vintners seem to have figured out to keep fruit forward, lay off the new oak and let the grape be itself.

Interestingly, the tannic Tannat grape has been added to Meritage blends to the point where it required its own category. I was disappointed with the results; the regular Meritage flights were much better. Tannat is like a “black hole” for wine character; use more than five percent in a blend and it can overwhelm everything else.

Last year, the Cup was won by 868 Vineyards in northern Loudoun County. Carl DiManno, the proprietor, won the Cup with a passiomento (dried grape) style of Vidal blanc, the French hyrid white grape. Barboursville’s “Malvaxia” style wine, made from Muscat Ottonel grapes, was his inspiration for this style of wine.

I mention this because this year, there were half a dozen white dessert wines made in this style, and as a group, they were quite impressive. You can’t leave most white Virginia wine grapes on the vine late enough in the season for them to dessicate naturally, because before that happens they’ll be consumed by black rot. You can either pick the grapes at optimal ripeness and artificially freeze them, to get “cryo” dessert wine, or find a way to dry them out while keeping black rot spores away, so they can then be pressed and fermented cleanly. 868 Vineyards’ prize last year seems to have inspired a number of wineries, and the results are impressive!

Very soon, the 2021 Virginia Governor’s Cup awards will be announced. This year, there will not be the traditional in-person gala with Governor Northam due to the pandemic. Stay tuned to this site, and to www.virginiawine.org for the news.