Sadly, I report that just past midnight GMT, Steven Spurrier passed away his home at age eighty, surrounded by his family. Spurrier, a leading British wine writer, was most famous for engineering the 1976 “Judgment of Paris” blind tasting in which top Napa Valley Chardonnays and Cabernet Sauvignons soundly out-performed their French counterparts, giving Napa Valley wines (and by extension, others from California) instant respectability on the world wine stage. Interestingly, the same wines were tasted again a decade later with much the same result, and again, 30 years later, with little change.

Spurrier bought his Paris wine shop, the Cave du Madeleine, in 1970, and established a wine school there, the Acadamie du Vin, in 1973. The Academie became influential in training a generation of wine professionals whose careers rose together with the increasing consumer culture of wine in the 1980s. Spurrier also designed and ran the wine course for the British auction house Christie’s.

After fifty years in the wine trade, he and his wife Bella became winegrowers, members of the very new English wine trade, with Bride Valley, a vineyard and winery making fine sparkling wine in the champagne method. Bride Valley is in the English countryside of Dorset. The vineyard is south-facing, and the soil not only limestone, as with many fine French wine regions, but specifically kimmeridgian limestone, as he pointed out to me, found in the southern Aube region of Champagne. Bride Valley’s first vintage of 2011 was released after three years on the lees, and sold out promptly.

His last book, A Life in Wine, was published in 2020. One remarkable feature of the book is “A few words about Steven;” it runs to 39 pages (!) and has entries from 24 colleagues. They include international winemakers, Masters of Wine, fellow wine writers and friends. All testify to his personal generosity, his passion for wine and for helping others to learn about it, his graciousness, and his impeccable taste in dress.

I first met Spurrier when he attended the Virginia Wine Experience in London which brought 64 curated Virginia wines to London for a tasting in 2007 (disclosure: I was Executive Director of the event). “I can remember Hugh Johnson, Jancis Robinson and Andrew Jefford remarking how good the wines were and (this is important) how nice the people were presenting them,” he wrote in the foreword to the third edition of my book Beyond Jefferson’s Vines: the Evolution of Quality Wine in Virginia (2020).

He then made a point of visiting the Virginia booth at the London International Wine Fair starting in 2011. “He always stayed at least 45 minutes,” recalls Virginia Wine Marketing Office Director Ann Boyd. “He was always so gracious.” One Virginia vintner told me that when Spurrier had tasted a Viognier from a major Rhone producer, he brought him to the Virginia booth and gave him a taste of this vintner’s Viognier, telling him “This is what Viognier should taste like.” “It’s not easy to break into the UK wine market,” reflects Spurrier in his foreword, “but what little was achieved in sales was made up for by recognition of quality.”

Spurrier agreed to be the keynote speaker at the trade-oriented Virginia Wine Summit in Richmond in 2012. He concluded his address by telling the audience, “Virginia is my favorite North American wine region today, because it makes the kinds of wines I like to have a second glass of.” Spurrier went on to become a judge in the annual Virginia Wine Governor’s Cup competition from 2015-20 (as has this writer). “The tastings [in this competition] have shown continuous precision and clarity in vineyard fruit, given the variety of soils and climate,” he wrote in the foreword. When judging the 2020 competition, he and I agreed that the Meritage (red Bordeaux blend) category had become world-class and would be Virginia’s calling card for serious wine drinkers and buyers. 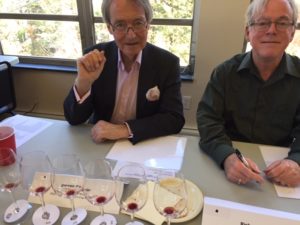 Tassie Pippert of James Madison University and Shari Pennington of Virginia Public Media have been producing a public television program called “Un-Wine’d”, about Virginia wine and the people making it. I was honored to be included in an episode discussing Thomas Jefferson and his vision for Virginia wine. I put them in touch with Steven who agreed to be interviewed via Zoom, which thankfully took place just a few weeks ago and will be featured in the upcoming season.

I am grateful to Steven for agreeing to write the foreword to my new third edition of Beyond Jefferson’s Vines, and for his willingness to taste the wines of an unknown region with an open mind and palate. He  then gave his blessing to the winemakers and grape growers who have worked diligently for decades to put Virginia wine on the map of quality wine, where it now belongs. He concluded his foreword to my book by writing “For me, quality wine is the 3 “P”s: P1 is the Place, P2 are the people, and P3 is the product, which should always reflect the truth and honesty of the first two. All recognized wine regions across the world are a mirror of this and, as Richard Leahy will tell you in this third edition, so is Virginia.”

Bartholomew Broadbent, a wine importer and distributor based in Richmond, son of the late Michael Broadbent MW, and said in a Facebook post that Steven was a huge influence on his life. “Steven has always been incredibly kind to me… Over the years, my friendship with Steven grew. From being my father’s little boy working a summer job in his Paris wine shop to the young wine professional from which a respect and friendship blossomed. It is not easy transitioning from knowing someone as a friend of your father’s to accepting that a genuine friendship of your own has grown. I find it hard to look up to someone like Steven [and Jancis Robinson] and not see them as friends of my parents but I never get the sense from Steven that he ever looks at me as anything but a friend in my own right.”

Spurrier could be witty in a dry English way. Last year when judging the Governor’s Cup together, I told him I had enrolled in the Master of Wine program for a couple of years but then withdrew; I summarized my experience in a limerick:

To become a Master of Wine
I once thought was dandy and fine,
But with far too much thinking
About all my drinking,
Conclude it’s a waste of my time.

Spurrier countered by writing down the following, which I still have:

The work to become an MW
Soon places your life in a bubble you
Will learn to regard
For the wines you have marked
Will always have rules that will trouble you.

The wine world has lost a giant, but one who touched many people (including myself) with his politeness, his generosity, his interest in new things in wine, and his example as a gentleman. His influence on Virginia wine as a new category of quality wine will be hard to measure.