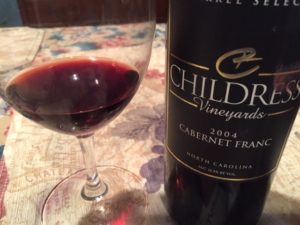 In 2004 I had the pleasure of traveling to Lexington, NC and interviewing Richard Childress, the famous NASCAR legend and then the owner of a new, eponymous winery in the Yadkin Valley AVA. The resulting story made the cover of a national wine trade magazine.

Recently I discovered a stash of Childress wines I had acquired in the early aughts (the winery was founded in 2003). Tonight I had an ahi tuna steak and opened the 2004 Cabernet Franc; it was the right decision.

I should say that Childress had told me that he had become introduced to fine wine when traveling the NASCAR circuit, and had become a believer. He then wanted to share his love of fine wine with fellow North Carolinians, and decided to build a Tuscan-inspired winery and vineyard and offer a full range of locally grown wines for every palate.

One of the brilliant things he did was to conduct a talent search for the best winemaker on the East Coast, and was told that Mark Friszolowski, then of Pindar Vineyards, was his man. Few in the Eastern industry would have argued with this; Friszolowski was experienced, capable and, as the initial 2003 vintage at Childress proved, able to make impressive wine in the worst of vintages.

In the Mid-Atlantic, 2004 was a “classic” vintage, cool but not too wet, with a long growing season that ripened the grapes while retaining freshness and depth of fruit. This Cabernet Franc is a fine example (it doesn’t carry the Yadkin Valley AVA because it contains fruit from around the state). It proves that “Cabernet Franc is the poor man’s Pinot Noir”, although I don’t feel deprived being able to enjoy this wine!

On the nose, there is the typical black cherry of the grape, but also forest floor and clean earth, from years of maturity. On the palate, it is much like Pinot, with a balance of fresh, crisp black fruit and earth tones, ripe tannins and a clean finish with a hint of tobacco. Chambolle Musigny, anyone? Go ahead and put this in a tasting with other Cab Francs and fine Pinot Noirs of a comparable age, if you can find them; it’s well worth it. Oh, and hats off to winemaker Mark Friszolowski, showing us how the potential of a young North Carolina winery with quality state Cabernet Franc.

As an aside, I also recently enjoyed a 2005 Childress Syrah.