Interpreting the Great 2019 Vintage Through the Red Wines of DuCard

Twice in 2021 I wrote with enthusiasm about the new Virginia red wines of what has emerged to be a great 2019 vintage, for me the best since 2001. 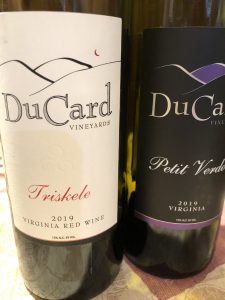 Recently I had the opportunity to view the 2019 vintage through the lens of the dry red wines of DuCard Vineyards, the northern most winery in the Monticello AVA close to Old Rag Mountain. The wines included their Poplin Run Red (a blend of mostly Cabernet Franc and Merlot), varietal Merlot, Petit Verdot, and Norton, and their Cabernet Franc-dominant Triskele, which also includes Merlot and Petit Verdot. Their varietal Cabernet Franc was included in my tasting notes on this blog from 10/18/21 and repeated below.

Proprietor Scott Eliff had already decanted most of the wines from the bottles six hours before our tasting, yet all the wines except the Poplin Run were still shut down and very hard to taste, although the textures were remarkably smooth and silky.

I asked Scott what he recalled from the vintage that made it exceptional. “The season was really good all the way through,” he said. “It was a long growing season, no frost in spring which has been a problem recently. In August and September, we didn’t get much rain, allowing the reds to ripen without the sugars dropping, then we could get hang time into harvest. When we got the wines in, Julien [the winemaker] thought the vintage was superior so we decided to hold the wines back. We had enough other wines in the cellar to allow us to age most of the ’19 reds another year before release. This vintage shows what the potential is for Virginia reds.”

Winemaker Julien Durantie adds that the 2019 vintage was the first that they were managing the Whetstone Vineyard (which they lease, on Wolftown Road, a few miles west). It currently has five acres of vines, and they’ve planted more Petit Verdot as well as Merlot and Tannat. The site is warmer and drier than their site at DuCard. Whetstone Run in 2018 for example only got less than an inch of rain just before harvest, but their home vineyard got 8 inches.

Scott says they’ll have almost all their varieties on at least two vineyard sites, to help avoid frost or rain losses and give them the best toolkit possibilities. A third vineyard, six miles east of DuCard, is the Tana Vineyard; it faces northwest so it’s great for Chardonnay and white varieties, while Whetstone Run is west/southwest- facing, which makes it better for ripening red grapes.

Julien noticed that these 2019 reds, especially the Triskele and Petit Verdot, were very shut down on the nose and palate. He thought they would do better with longer aging, so he talked Scott into holding them back for another year to age in the bottle. Except for the Cabernet Franc Reserve and Poplin Run Red, the other three wines have not yet been released.

The Cab Franc Reserve that I had reviewed last October contains 80% of fruit from the Whetstone Run vineyard. My tasting notes are repeated here:

This is only the second vintage DuCard has made a reserve Cabernet Franc. It was aged in all neutral French oak. Nose: ripe, clean black cherry, generous toasty oak. Needs decanting or the oak will dominate the flavor at this point. Palate: LARGE volume! Big all the way: black cherry flavors, lots of chewy oak, and picante black pepper. This is more new oak than I usually prefer in a Cabernet Franc, and for optimal integration and enjoyment I would recommend laying this down for at least five years, but it could likely last a decade or more. Even then, I’d recommend decanting. Proprietor Scott Eliff has his staff “religiously” decant this wine, and he says “It changes a ton in about 10-20 minutes.”

A Merlot/Cabernet Franc blend, the nose is bright with ripe red fruits like cherry and wild berries, the freshness of fruit purity is typical of the 2019 vintage (this wine has been released since last fall). Palate: Very juicy! Loads of ripe red fruits; cranberry, cherry, strawberry and raspberry. Then, firm acidity on mid-palate through to finish. Fruit-forward, ripe but balanced and easy to quaff. Although high quality, Scott describes Poplin Run as Ducard’s “entry-level” red wine.

Nose: clean but closed with hints of black fruits and herbs. Palate: not much flavor but a plush texture with rich, ripe tannins and firm acidity on the finish. Needs time, but this style makes me think of Pomerol, the famous Merlot-growing commune near St. Emilion on the “Right Bank” in Bordeaux, for the balance of plush ripe tannins and firm acidity. Aged in all French oak, all neutral, and 50% in a 350 liter puncheon (the average winery barrel capacity is 225 liters). This wine really needs more time to evolve and for flavor to develop. A day and a half after being open, the nose was still almost mute, with a hint of red fruits and herbs. This wine needs another two years at least, but can age five to ten years.

Nose: subtle but more defined than with the Merlot, with typical varietal notes of lavender, rock rose and sage. Palate: vividly bright, firm acidity, ripe but firm tannins, not much fruit flavor. Two days later: flavor still elusive, but texture very plush. On the nose, herbs, lavender, and ripe black fruits persist. A lovely Petit Verdot but also needs time; can last as long as the Merlot but will come around sooner.

DuCard’s proprietary red blend, it takes its name from a Celtic symbol for a three-part whole. This vintage is 45% Cabernet Franc, 30% Petit Verdot, 25% Merlot. Nose: closed, no obvious oak but hints of ripe black fruits. After a half hour, the nose is still closed, with some hints of ripe black fruits. Two and a half days after being open: the nose shows ripe black cherry and a hint of baking spice. On the palate, black cherry flavors of Cabernet Franc dominate, with a smooth mid-palate texture but not plush, and a crisp fresh finish typical of the grape. Fresh, light and elegant, but this was after an already-open bottle had been left open another two and a half days! Age another year or two, and then enjoy for another five years or so.

This Norton was the most accessible of the varietal DuCard reds, and also probably the best varietal Virginia Norton I’ve tasted. Aside from the excellence of the vintage, Scott and Julien claim that their training system for Norton, which trains the canes up instead of down like the Geneva Double Curtain system most widely used for Norton, makes a qualitative difference in the fruit, since it’s all exposed to air and light.

Nose: typical varietal damson plum notes with wild blueberry. Hedonistic but elegant. Palate: juicy, ripe, smooth texture (oak was innerstaves in a stainless-steel tank). The finish is fresh but the mid-palate is rich and juicy, and oak influence is kept minimal. Julien says this is the best Norton he’s ever made, and it’s likely the best Norton I’ve ever tasted.

My impression of superior quality from the 2019 vintage Virginia red wines was further confirmed as I tasted dozens of them as varietals and blends in the 2022 Virginia Governor’s Cup competition.